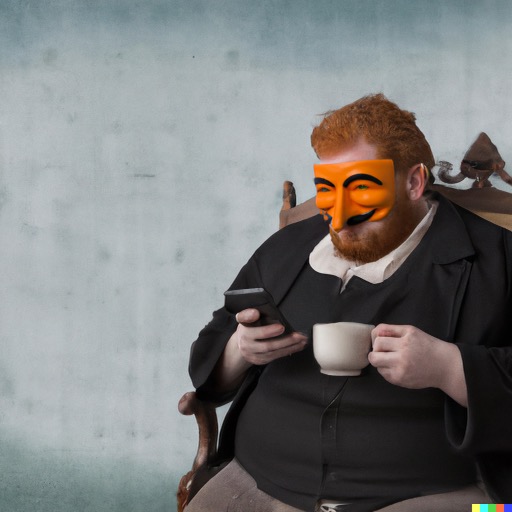 Welcome to (anon), a weekly regurgitation of undigestible DAO-related news.

Tornado Cash, an open-source protocol for private transactions on the Ethereum network, more casually referred to as a “coin mixer”, was sanctioned by the U.S. Government! A U.S. government official broke the news to Twitter in a tweet where he incorrectly tweeted that Tornado Cash is sponsored and operated by North Korean hacking groups.

It’s so comforting to know that these are the same geniuses who are toiling away to “regulate” crypto. The tweet was quickly deleted after the angry-beehive mind that is Crypto Twitter began stinging the poor gov. official with copy edits.

But thankfully, someone saved screenshots. 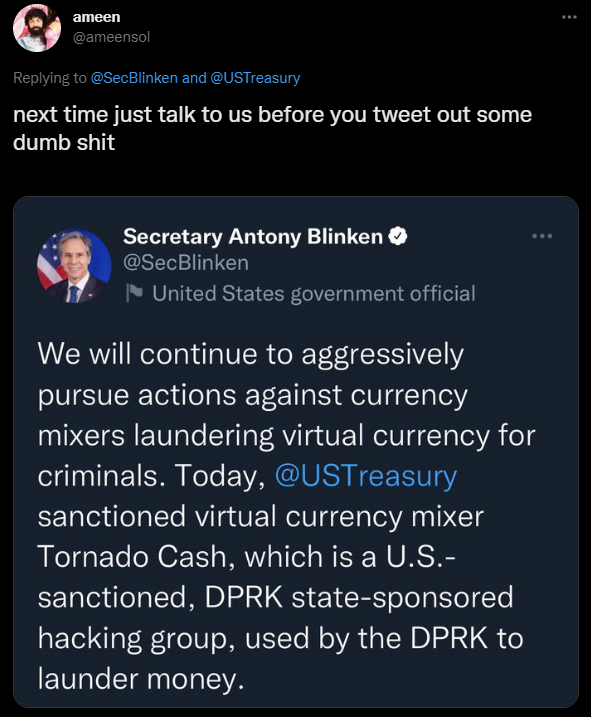 Not long after the sanctions were announced, developers who have contributed to Tornado Cash found their GitHub accounts with Tornado-related code frozen.

Even if you believe Tornado Cash is an evil execration that deserves to coat the lowest depths of hell, censorship resistance is a core tenet of blockchain technology. So you need to get pissed off. Please?

Twitter, as usual, can’t make up its unwanted-thoughts-saturated mind. The two most common, not contradictory takes:

Also: Tornado Cash defenders (including Lord Vitalik himself) are quick to point out the many legitimate use cases it has– including donating “to a cause that might get you in trouble if done publicly.” Like supporting your many mistresses or boy toys.

Hmmm. Yes, Tornado is out of commission for U.S. citizens—FOR NOW. But it can easily be redeployed to another smart contract address and probably get a few months before the U.S. government would figure it out and take steps to… sanction people or exchanges transacting with the new smart contract addresses. Curse you North Korean hackers!

Plus, the fun is just beginning! The sanction stated that anyone who interacts with Ether that has been touched by Tornado Cash is liable for it. Which created an extremely effective way to deal with the government and your other enemies– just send them a little bit of ETH.

Which, is of course, exactly what happened. You gotta love the networked mind!

It took less than 24 hours after the sanction had been announced for people to start sending out Tornado-tainted ETH to the wallets of celebrities and influencers. 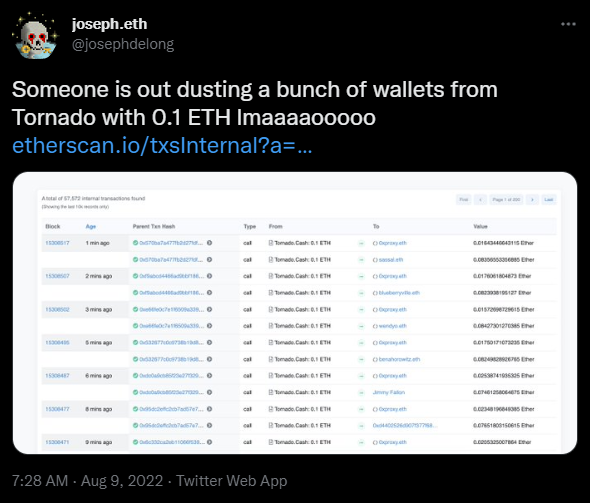 This begs the question of liability: will developers or investors be held responsible when a smart contract can not? DAO’s have avoided liability in the past by being sufficiently decentralized– and so far, it seems sufficiently decentralized enough to keep them in the clear. If the U.S. government does decide to go after those who fund or develop smart contracts, it will set a dangerous precedent that might scare talented builders away from the industry, or from maintaining their U.S. citizenship.

Thoughts and prayers to any devs who worked on a project years ago that Blinken & Co. suddenly believe is the work of North Koreans!

All your USDC belong to US

Soon after the Tornado Cash sanction was announced, all of the USDC held in the smart-contract was frozen by its issuer, Circle.

USDC has long been criticized for its centralization, mostly out of fear that what just happened would happen. While many thought USDC’s naysayers needed to take off their tinfoil hats, it turns out we all need more Reynold’s Wrap in our lives.

This has reinvigorated discussions around the importance of censorship-resistant stablecoins.

Enter MakerDAO. While MakerDAO’s stablecoin, the beloved DAI, is considered to be a more censorship-resistant alternative to USDC, at the time of writing this, 32% of its almost $11 billion in collateral is, erm… in USDC.

And yet nonetheless DAI was widely considered to be a more censorship-resistant stablecoin when compared to USDC or your dad’s fav stablecoin, Tether. MakerDAO now faces the risk of having all the USDC it holds as collateral frozen at the whim of the U.S. government– an event that would be catastrophic for the stablecoin, all of humanity and maybe even (anon).

MakerDAO Cofounder, RuneKek (not his real name!) discussed converting some of the USDC that Maker holds into ETH in order to de-risk potential blacklisting or sanctions that could harm the stablecoin.

A notion that some ETH nerds thought wasn’t a great idea.

But what does Vito know? He only invented Ethereum. I say YOLO on my friends. 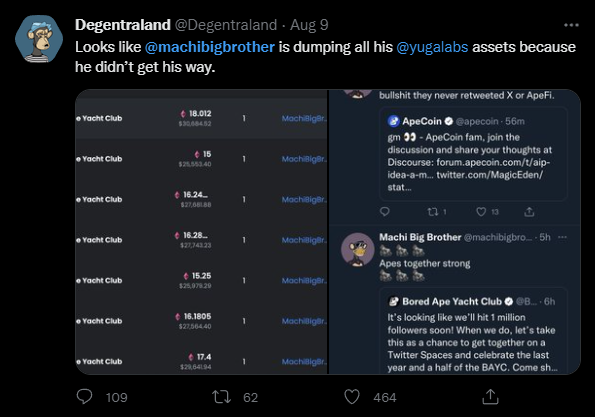 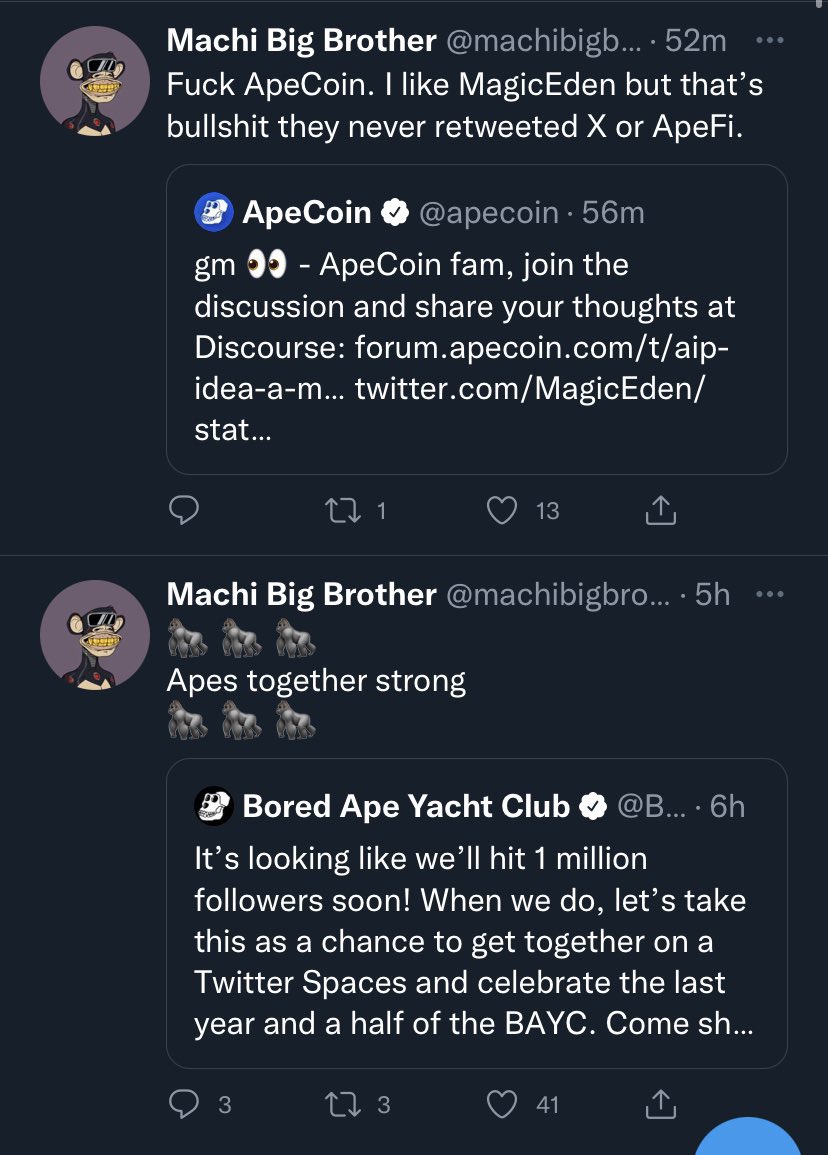 MachiBigBrother, who was recently doxxed—and it wasn't pretty— submitted a proposal to ApeCoin. When the proposal wasn’t retweeted by the ApeCoin Twitter account (as most other proposals are) he threw a fit and began listing Mutant Ape Yacht Club NFTs at and below floor price in retaliation.

If MachiBigBrother is a scammer, as the doxxer would have it, this brings up an interesting point. ApeCoin wants to be a truly fair and decentralized DAO, so shouldn’t it give all proposals the same amount of exposure to keep it equitable? Crooks, scoundrels, racists, Jesus Freaks, fish heads, politicians, Anons—everyone is equal in the decentralized world. I’m right, right? Right?

Blinken makes me think of Wynken, Blynken, and Nod

A great fucking poem when you are on acid:

Wynken, Blynken, and Nod one night

Sailed off in a wooden shoe—

Sailed on a river of crystal light Into a sea of dew.

"Where are you going, and what do you wish?" The old moon asked the three.

"We have come to fish for the herring-fish That live in this beautiful sea;

Nets of silver and gold have we,"