Markets were fixated on the all-important release of U.S. inflation data on Thursday. The number did not disappoint. The headline Consumer Price Index (CPI) for December came in at an annualized 6.5%, with the “core” rate excluding volatile commodity prices registering a tame 5.7%. This continues a six-month trend of lower readings that market participants hope will lead the U.S. Federal Reserve to end its cycle of rate rises – and fuel the next bull market. 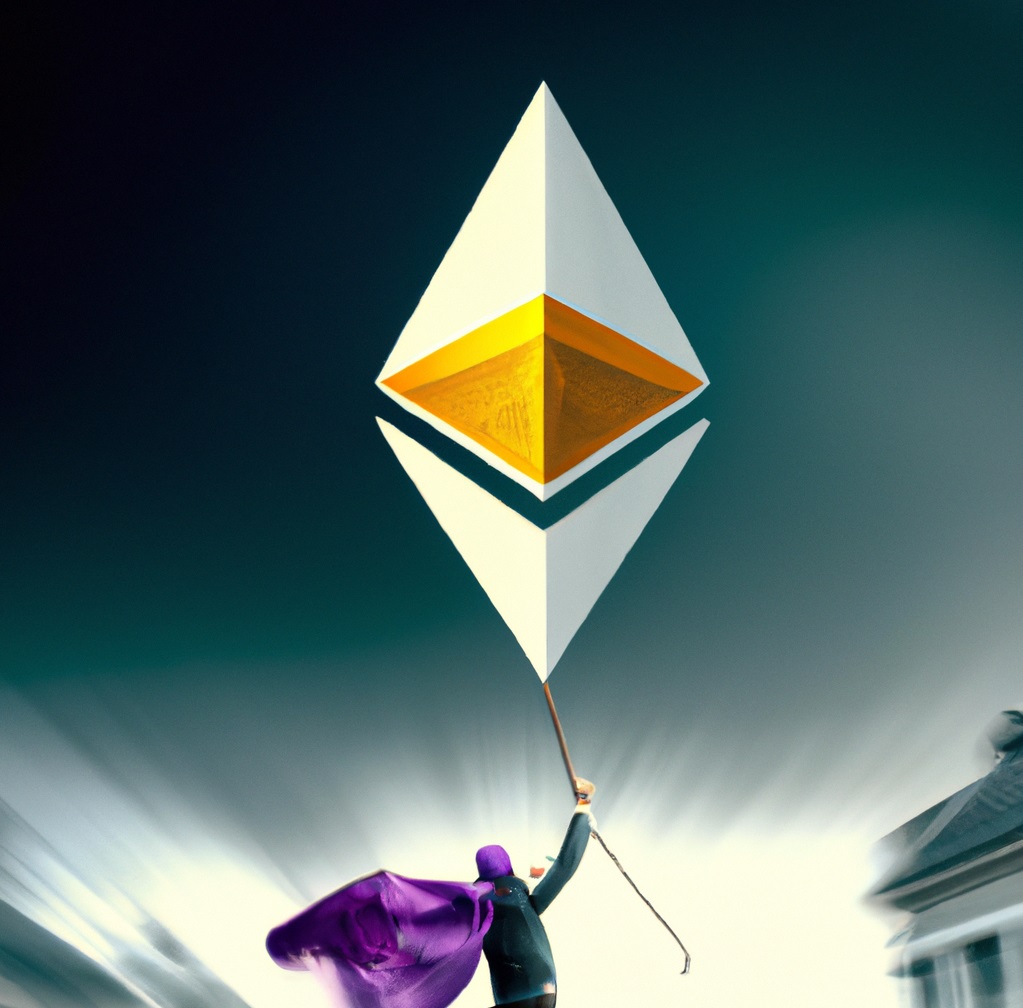 Although the trend of falling inflation is clear, a rate of 6.5% is still far above the headline inflation readings of the past 25 years. Despite this, the interest rate on 10-year U.S. treasuries is a mere 3.5%, a full percentage point below the Fed’s overnight policy rate. Dealers have consistently priced in a schedule of rate cuts from the Fed despite the continuous admonitions of Fed members that the central bank is singularly focused on bringing inflation back to its target rate of 2%.

Month-over-month inflation data might be the source of bond traders’ confidence that the Fed is at the end of its rate hike cycle. Annualizing the last six months of CPI data implies an inflation rate of 1.8%.

A chink in the Fed’s rhetorical armor might have been revealed in a relatively dovish speech by Philadelphia Fed President Patrick Harper following the data release. Addressing the Main Line Chamber of Commerce, Harker said:

“I expect that we will raise rates a few more times this year, though, to my mind, the days of us raising them 75 basis points at a time have surely passed. In my view, hikes of 25 basis points will be appropriate going forward.”

I guess having a regional Fed president mark the terminal Fed Funds rate at 5% was dovish enough for the markets.  Risk assets ended a bullish week on a positive note, with the NASDAQ 100 up 4%.

Crypto markets did not respond to the data release but nonetheless ended the week sharply higher. Bear selling appears to have been exhausted––for now.  Bulls are in control, with BNB up 17%, ETH up 20%, and BTC up 22%.  SOL has continued the rebound sparked by a tweet from Vitalik Buterin on December 29 and is now up 128% in 2023. 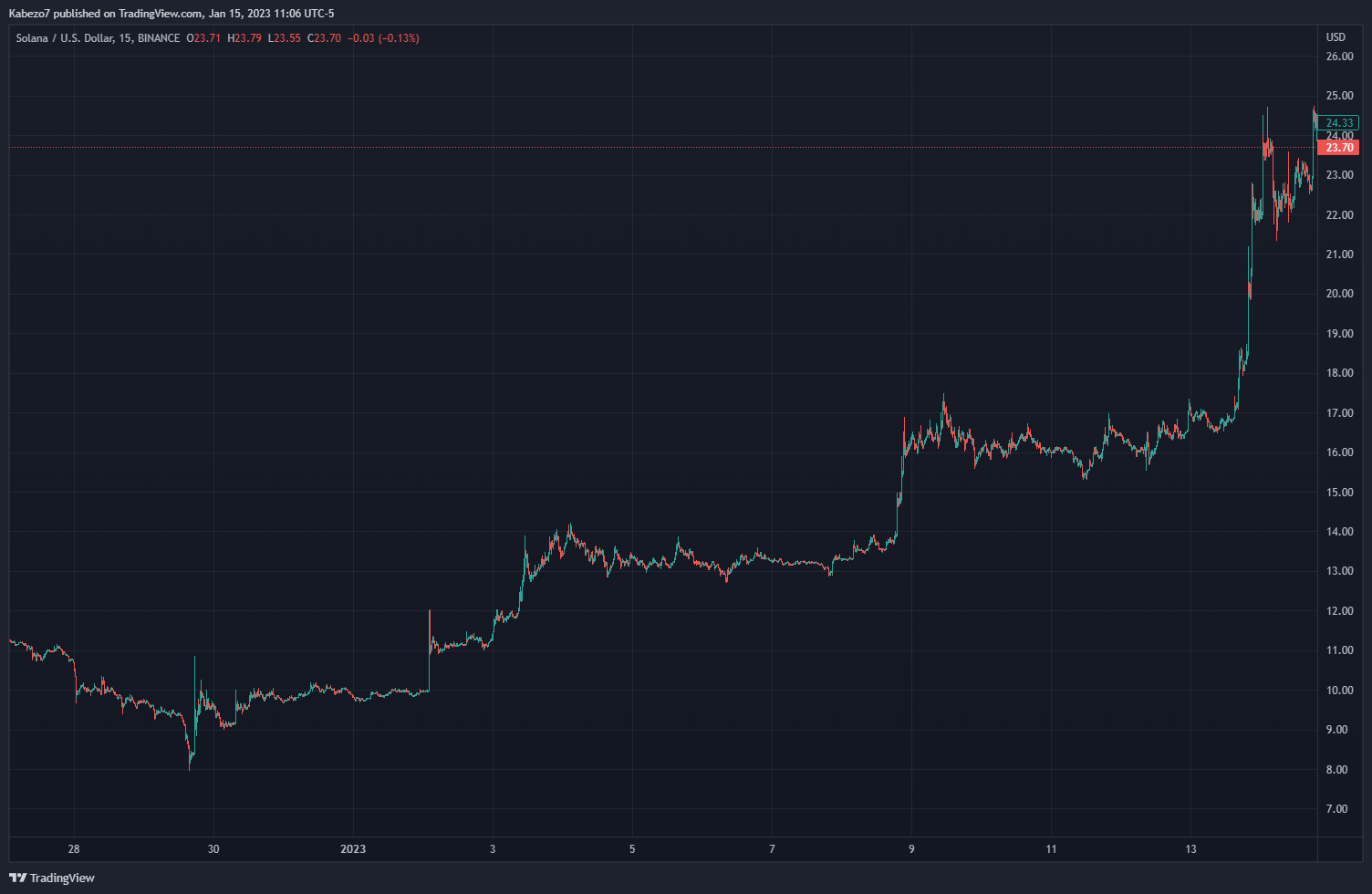 If there is news powering the rally, it is not a breakthrough on the regulatory front.

The Bank for International Settlements (BIS) weighed in on crypto this week with Bulletin #66, “Addressing the risks in crypto:  laying out the options.”  The paper neatly suggests three alternatives for dealing with crypto: ban, contain or regulate. 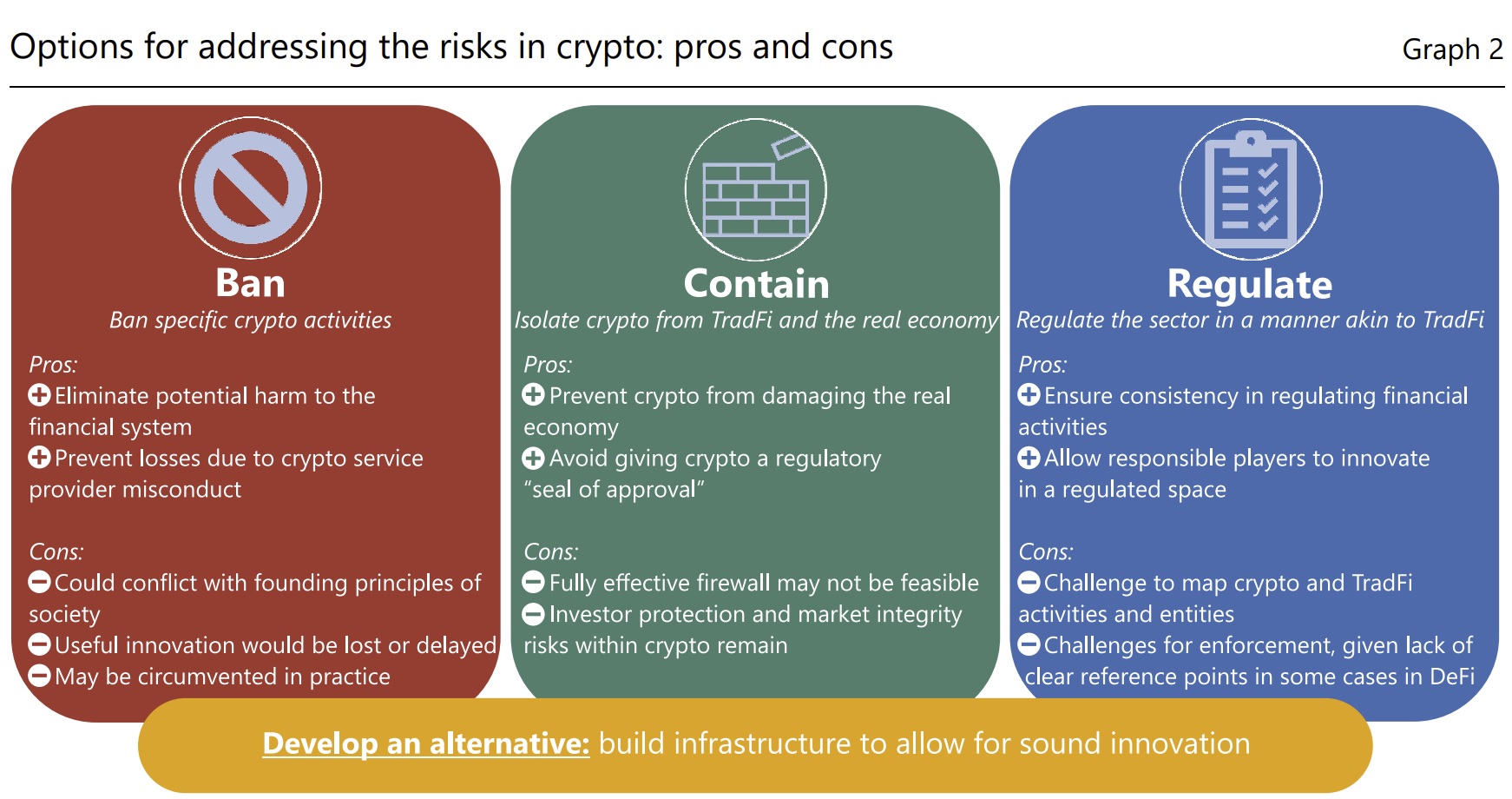 I admire the authors’ correct use of the terms TradFi, CeFi, and DeFi, and general crypto competence. But there are alternatives to the three ways of strangling crypto they propose. A sunnier take might be to suggest using blockchain technology to bring transparency and agency to the financial system while removing the need for trusted intermediaries.

“The mystery of government is not how Washington works but how to make it stop.”  ― P.J. O'Rourke

Big U.S. regulators, including the Federal Reserve, the Federal Deposit Insurance Corporation (FDIC), and the Office of the Comptroller of the Currency (OCC), issued a joint statement on crypto-asset risks to banks. It was a mixed bag of boilerplate warnings and disclaimers that seemed designed to be contradictory.

For example, it stated:

“Banking organizations are neither prohibited nor discouraged from providing banking services to customers of any specific class or type….”

But it then went on to say:

"the agencies believe that issuing or holding as principal crypto-assets … is highly likely to be inconsistent with safe and sound banking practices."

In other words, providing banking services to this tiny industry is not what a safe bank should do.

I wonder if the authors think crypto firms should likewise be discouraged from providing services to banks.  This would put in a funny place the estimated $600 million that Goldman Sachs invested in crypto infrastructure plays in 2022.

Goldman announced this week that its GS DAP™ asset tokenization platform is now live. It is somewhat strange since the press release dated January 10th mentions the issuance of a blockchain bond by the European Investment Bank on the platform that I wrote about last month. How could that bond have been issued on November 29th, 2022, when the “private blockchain” it was issued on went live this week?

Puzzling as that may be, it is even more confounding that Goldman sees a difference between its “private blockchain” and an ordinary database. This must be the vision of crypto “guided” by Goldman Sachs that CEO David Solomon referred to in his December 6th WSJ OpEd.

The CFA institute, a credentialing organization for financial analysts, published “Cryptoassets:  Beyond the Hype.”  The piece––which is part explainer, part policy prescription, and part guideline for CFA Charterholders––reveals a nuanced understanding of crypto and concludes with a plea for regulation that will encourage the crypto ecosystem to scale and fulfill its promise as a revolutionary technology.  Sounds good to me!

Ondo Capital Management has answered the call for tokenized T-bills. It launched this week a tokenized fund that aims to bring “the risk-free rate on-chain.”  Ondo’s OUSG gives USDC HODLers access to the T-bill yield by transmitting funds to the $19 billion iShares Short Treasury Bond ETF managed by Black Rock. Available to qualified purchasers in increments of 100,000 USDC, the investor receives tokens that can be transferred or deposited into approved DeFi smart contracts.

While it is not the T-bill answer to Circle’s USDC that I hope BNY Mellon will one-day issue on-chain, Ondo’s product should begin the convergence of crypto rates with TradFi rates.

None of this is cause for celebration, especially among crypto bros of a libertarian bent.  But it is an affirmation that the very biggest TradFi players are paying close attention to the space. Crypto is beginning to shed its veneer of being a monetary science experiment. Like it or not, this is no reason to sell.

Prices are higher this week because there are more buyers than sellers. Who are they? Nobody knows.

But after the lava flow of three-letter acronyms, perp-walk photos, and Twitter mudslinging over the last two months, I doubt retail investors and DeFi degens are the ones apeing in. The big crypto venture capital funds like a16z are still flush with cash. However, they are focused on startups and engineering teams solving difficult problems, not large-cap tokens. They have done their job, and builders of quality projects have well-funded runways.

That leaves funds and institutions. Crypto funds have seen outflows and are still licking their wounds after a tough 2022. But there is still plenty of dry powder out there. For example, London-based hedge fund giant Brevan Howard launched a $1 billion crypto fund in 2022 and reportedly has yet to deploy most of the cash. Well held BH Digital!

I bet financial institutions are driving the market. Two of the three largest asset managers with a combined $10 trillion in AUM and all three of the largest custodian banks with a combined $55 trillion in AUC are now offering crypto services to their clients. This is not because wild-eyed crypto-anarchists are occupying C-suites and pushing self-destruct buttons on the financial system. 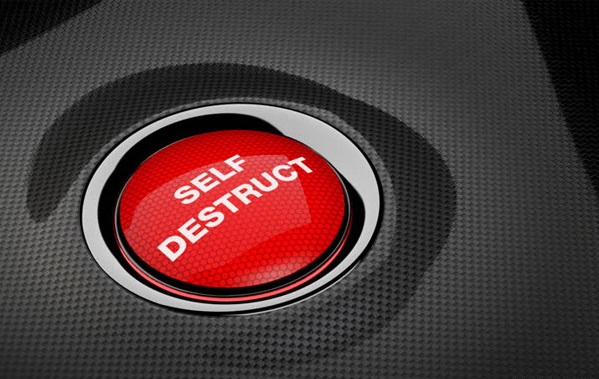 It is in response to client demand from the likes of pension funds and endowments. These types of clients take time to make allocations. For a new asset class to make it past investment committees, extensive due diligence is done. It might begin with choosing a custodian, and most of these financial giants launched their custody offerings in 2022. Fidelity ($4 trillion AUM) was the outlier, launching in 2018. It is easy to imagine that investment allocations are just beginning to hit the market.

For their part, the giant custodians are in it for the long haul. During BNY Mellon’s earnings call on Friday, CEO Robin Vince mentioned the demand and the bank’s commitment to the space in the wake of the FTX debacle, saying:

“If anything, the recent events in the crypto market only further highlight the need for trusted regulated providers in the digital asset space.”  When asked by an analyst to elaborate, he said: “…for digital assets, it's the longest term play out of any of the things that we’ve talked about.”

This is not the FOMO and FUD crowd.

Long-term players are in the building. 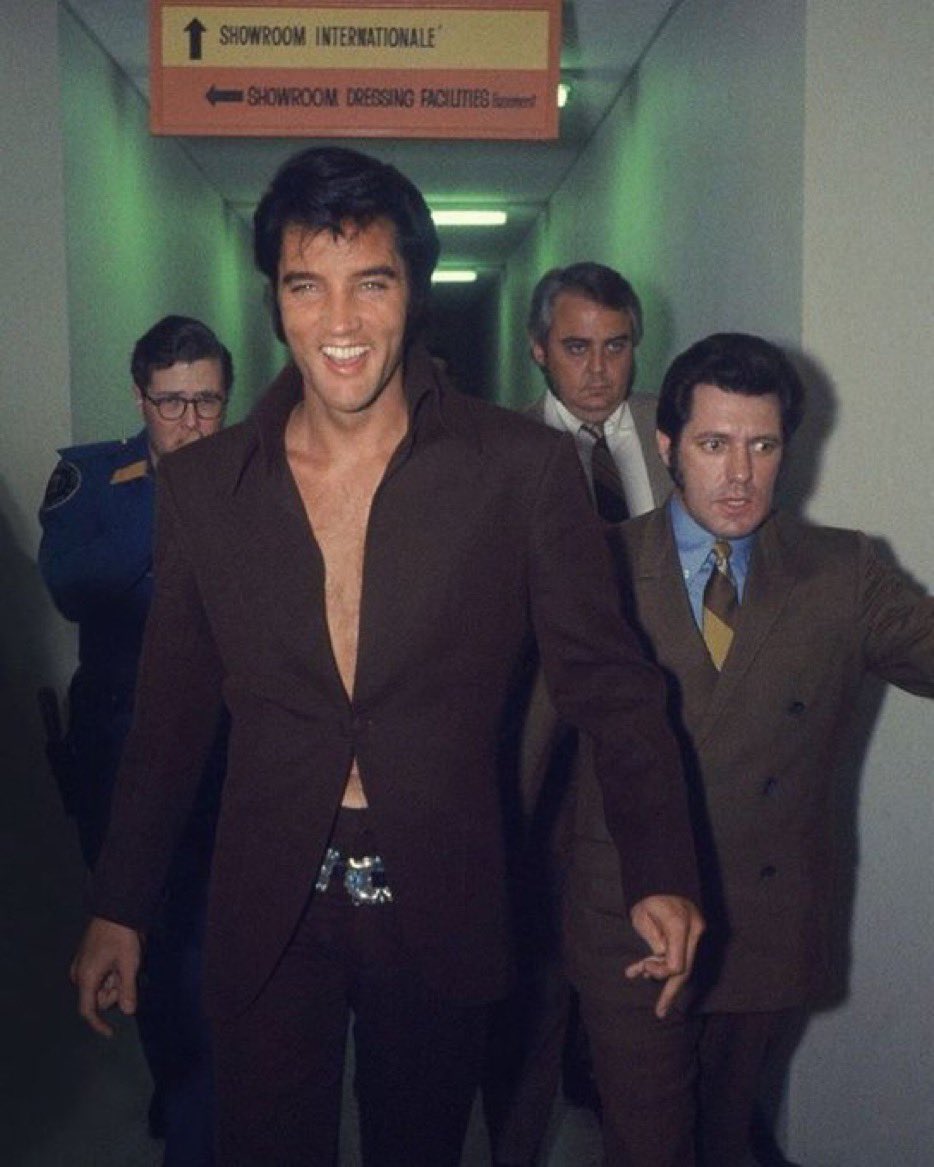 Where to find BSC News: