This article can be collected as an NFT on the Tezos Blockchain through FX(text). All proceeds will go towards the development of the project.

Battle For The Wastes is the culmination of several months' work with GAN AI art, spanning 4 separate NFT collections on Objkt.com & the TEZOS Blockchain, and the creation of an exciting overarching realm in which they reside. It is also a journey… a journey to realise this realm and its inhabitants as a fun and engaging card game / NFT hybrid.

The bleak landscapes of The Wastes are home to three warring factions. The Mechanighouls, Ghoul Hunters, and the Valkyries. Each faction comprises 50no. unique 1/1 “characters”, battling over 12 3/3 edition vistas, all created with the aid of machine-learning GAN ai software, Snowpixel.

Generative adversarial networks (GANs) are algorithms that pit computers against each other to produce original machine-made output approximating the human-made training data. In the case of Snowpixel, the training data are a series of words, phrases, and sentences, often elaborate, fanciful or esoteric…

As the collections grew, it became evident that these creations were destined to co-exist. And so, the blueprint for Battle For The Wastes was born.

For every original NFT produced, a card game variant was designed. When an NFT from the four series is purchased on primary sale, the corresponding card is airdropped to the buyer as a thank you. This series of cards have formed a collection on Objkt.com, known as “Battle for the Wastes - A Card Game”.

Cold, stark, unrelenting. These are all words to describe the harsh realities of The Wastes. Time has not been kind to these lands, but it is still “home” for those who can survive them. Enough to fight tooth and nail to retain what desperate scraps they lay claim to. 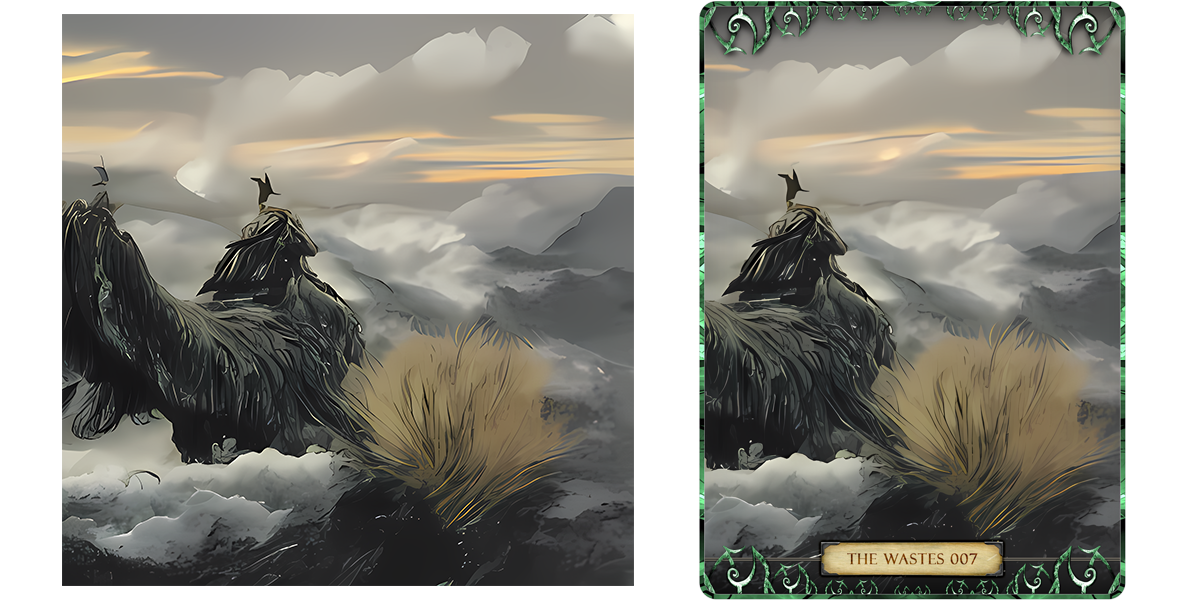 Our first faction, The macabre, aristocratic Mechanighouls lord over the wastes. Having overthrown their flesh-based masters during the Android Uprising, they vowed never again to bow to their inferior forefathers, but to rule... and indulge for good measure. 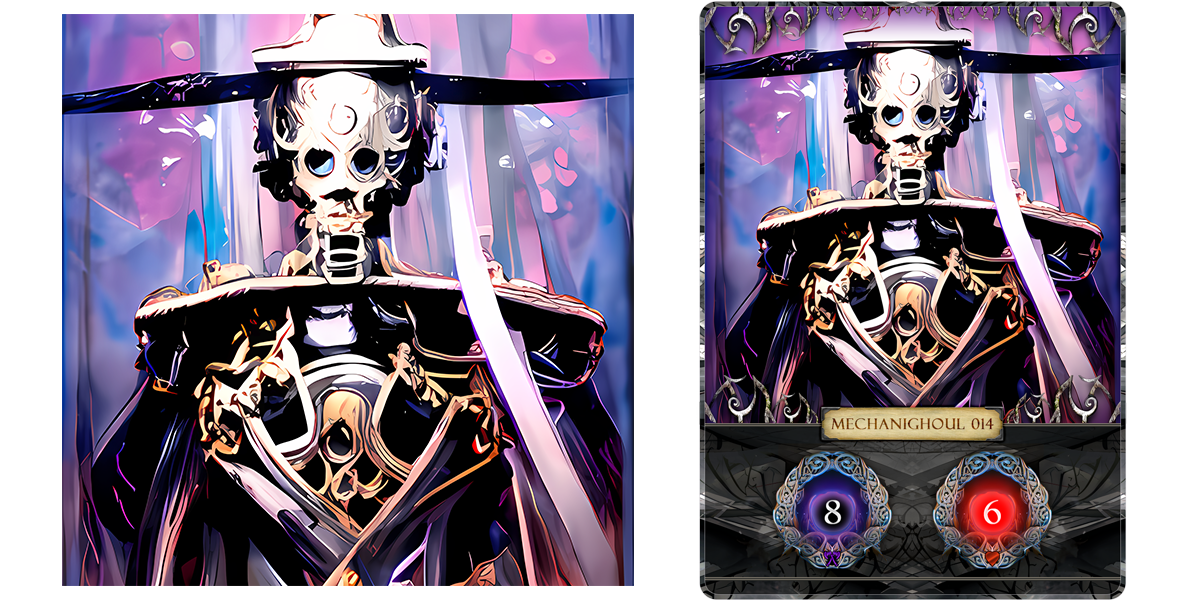 Meanwhile, the members of the second faction known as the Ghoul Hunters have been handpicked by their leaders to rid the wastes of the vile, wretched Mechanighouls. This band of specialist fighters has sworn to bury the demonic machinations once and for all. 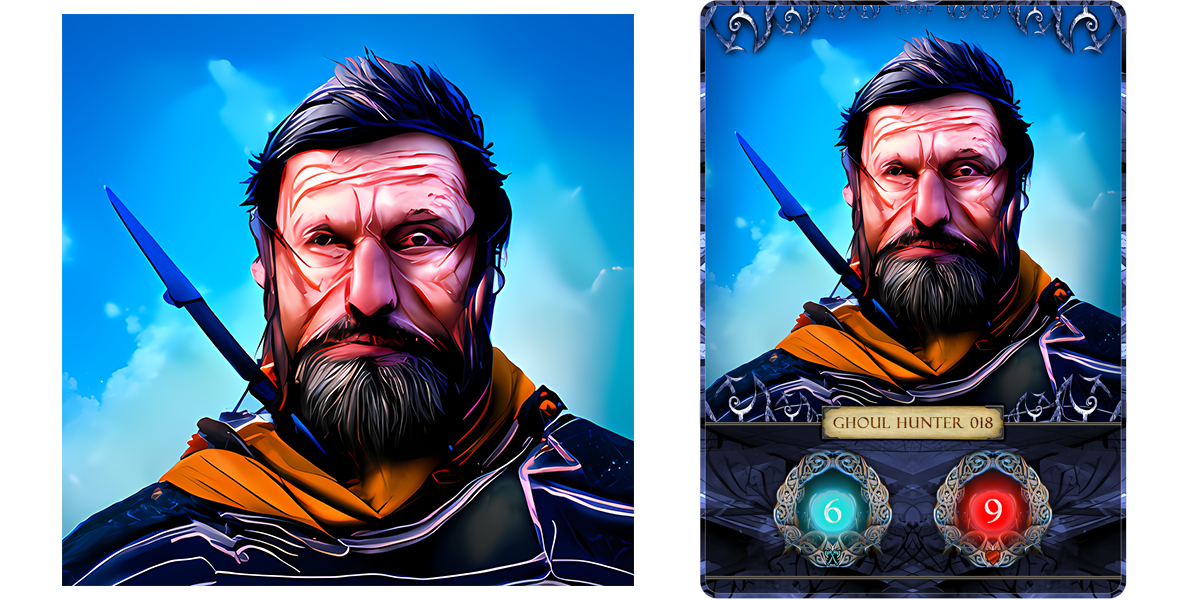 The Valkyries are the final faction and guardians of The Wastes. These fearless maiden warriors pledge to strike down any foe who dares to tread the path of the unrighteous and unjust, whether that be man or machine. 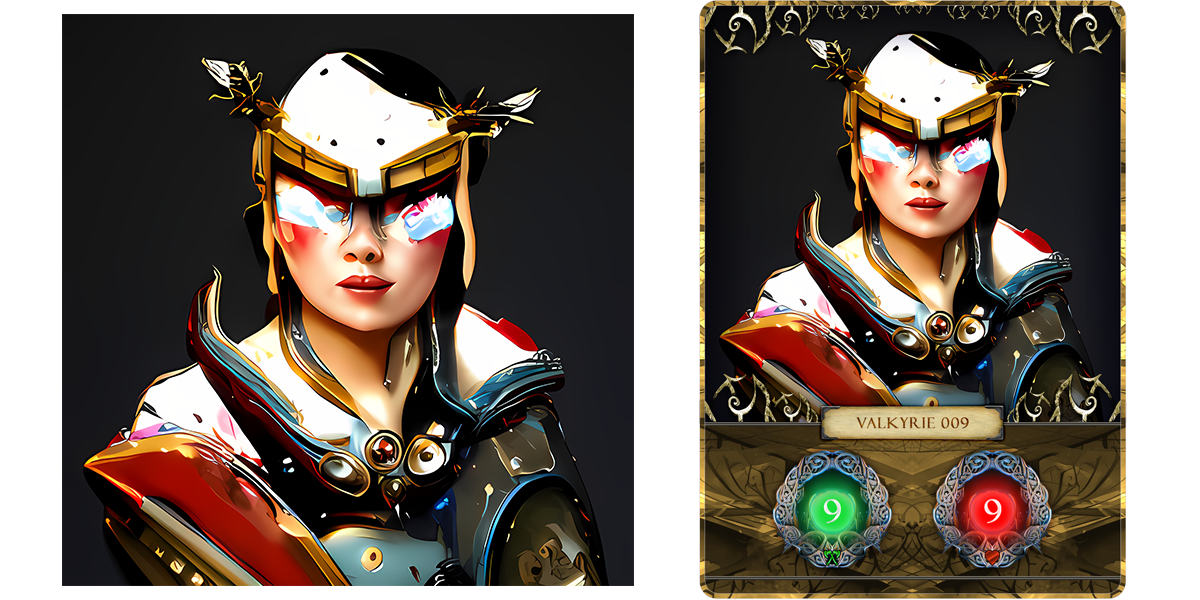 The card variants have been minted as two-sided 3D interactive GLB files, enabling the viewer to freely spin and zoom in to appreciate the detailing.

With the cards created, the next step is fleshing out / defining the rule sets and a series of playtesting sessions. Early playtesting will be done using Tabletop Simulator, with NFT holders being invited to take part and provide feedback.

All cards have been converted into movable, playable 3D assets within Tabletop Sim. The above video shows the assets being moved, rotated, and flipped within the gaming interface, and hopefully, you'll agree they look great! I have a few more steps to take before I can invite people to take part in playing a few games, but it’s almost there.

Additional lore and worldbuilding will come in the form of short stories and entries about each faction, and the history of the wastes...

How Can I Join In?

If you would like to jump on board and support the project, you can do so by collecting any of the available NFTs from the various factions and wastes. Links below.

You can also help contribute to the project by collecting an edition of this article.

See you on the battlefield.