In the recent record buyout of the feathered social media platform, Elon Musk’s repeated call for free speech and a fair, level platform for all could be no further from where we currently find ourselves on Twitter.

And it’s all thanks to Twitter Blue & its latest paid verification features. 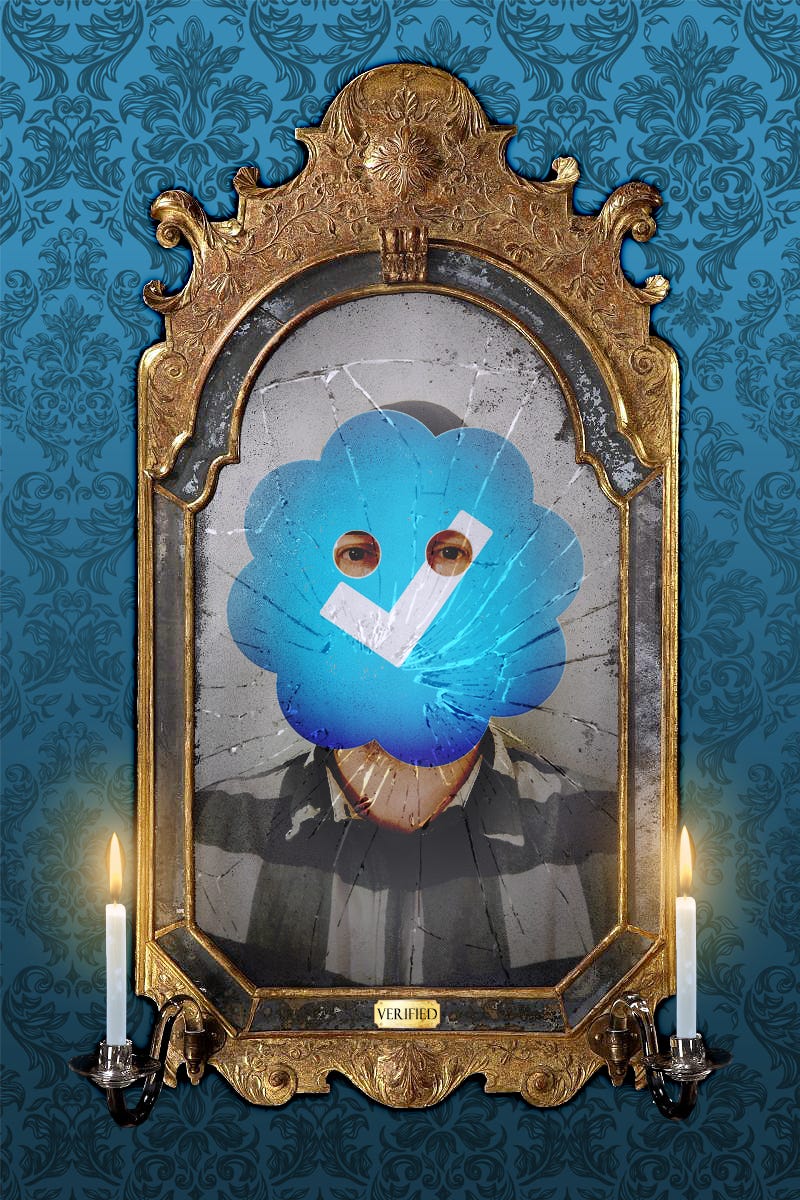 When it was first announced in June 2021, the premium opt-in service was initially set at $2.99, & would provide subscribers with:

NFT profile pictures were later added on January 20, 2022, displayed in a hexagon-shaped frame, rather than circular like other profile pictures. A planned “edit” feature for tweets was in development as of April 2022.

For many people in the NFT Twitter community, the ability to display a token as their profile image was appealing enough to take the plunge for a pretty small fee. That is of course if you had access to the service, as it was strictly limited to a small no. of countries (Australia, Canada, USA, and New Zealand) and only on iOS.

Now not only does most of the above sound like some pretty useful premium tools, but they also don’t provide any real “unfair advantage” over the average non-subscribed user.

This all changed in November when Twitter rolled out the following updates under Musk’s new direction.

When you navigate to Twitter Blue on either the mobile app or the website, aside from NFT profiles, a good majority of the original benefits appear to be scrubbed from this list. Instead, you are greeted with the following summary. Emboldened at the top of this list is now a “verified blue checkmark”, followed by “user prioritization”. It’s these two “perks” that pose a real problem. Let me explain why... 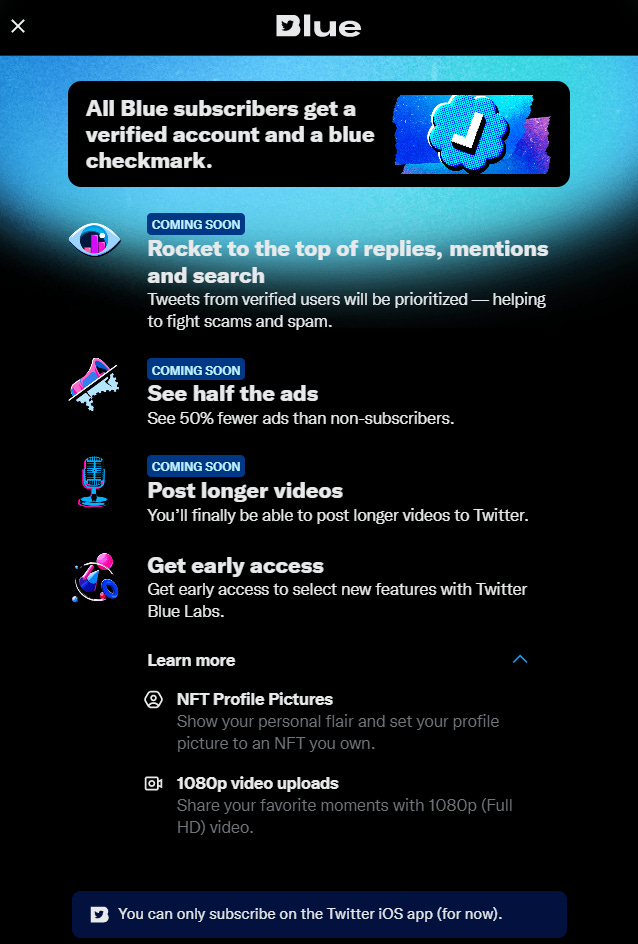 Firstly, verification is important. I am not against verification. Especially on a global scale such as Twitter. Government bodies, large corporations, established brands, athletes, entertainers, authors & personalities. They all use the platform, and the blue tick is one way for other users to validate & check they are viewing a legitimate source. Prior to Twitter Blue, the site verified six different types of accounts; for three of them (companies, brands, and influential individuals like activists), the existence of a Wikipedia page was one criterion for showing that the account has "Off Twitter Notability”. Applications were reviewed and proof had to be supplied in order to receive the checkmark.

Yet from October ‘22, Musk announced that verification could just be bought with Blue, and existing verified accounts would also need to pay to keep their current status. The price of Twitter Blue was also raised to $7.99 a month. So not only was this an opt-in for nonsubscribers, but it was also an opt-out for those seeking to retain the verification they had already obtained.

But the biggest issue with this approach is that by buying verification, users could sidestep the previous QA and review process that had been in place to validate the applications. Now, who would lie on an application?

What could possibly go wrong?

Quite a lot.. actually.

Eli Lilly’s stock fell 4.5 percent Friday after a user tweeted from a verified account that looked like an official Lilly profile: 'We are excited to announce insulin is now free.' This equates to a loss of around $15bn. 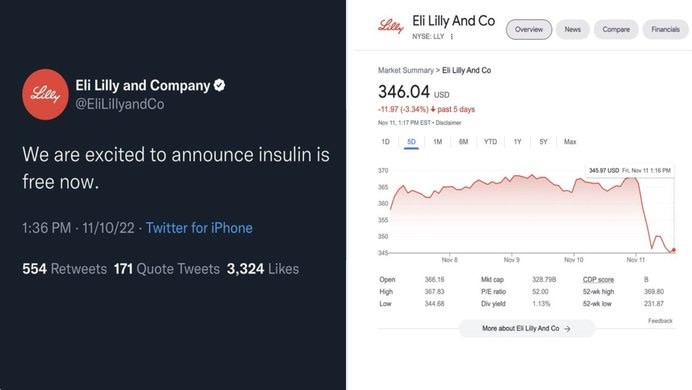 Meanwhile, Lockheed Martin suffered a similar fate, falling 5.5 percent after a verified account set up to look like the firm tweeted: 'We will begin halting all weapons sales to Saudi Arabia, Israel, and the United States until further investigation into their record of human rights abuses. #WeAreLM.'

Even fake accounts for Musk’s own Tesla and Space X were set up and claimed legitimacy with paid-for badges. It wasn’t long before the whole verification service was halted temporarily but the glaringly obvious effect has left many people questioning how Twitter didn’t see this coming.

Yet whilst some people like to see the corporate world take a hit, it’s the smaller individual that could be at the most risk.

If it’s this easy to fool people with some simple trolling then what about those who will actively target end users with scams and malicious intent?

Crypto Twitter (and Twitter in general) has been rife with such imposters in various forms, often led by those masquerading as interested parties with silver tongues and enough convincing for you to click a link or download a zip file. An officially verified account would previously have given you more reassurance you weren’t dealing with someone who was looking to drain your wallets. Now, not so much.

If you click on a checkmark that was obtained the “old way”, the platform will tell you they are notable in government, news, entertainment, or another designated category. If the checkmark was paid for, clicking it will say it’s because the account is subscribed to Twitter Blue. But all this does is add another hurdle when attempting to deduce the legitimacy of a person or entity. On the flip side, for all the genuine people who have signed up for $7.99 a month in a bid to be verified, their audience & peers may now be much more cautious or dubious to interact thanks to the trolls who have shown how broken the new system can be.

As of this time, it’s reported that an overhaul of the verification system will come as a relaunch on November 29th. As part of the relaunch, changing your “verified name” will cause you to lose your checkmark until that name is confirmed by Twitter. What effect that will have remains to be seen, as does whether the company’s remaining workforce will have the capacity to carry out these approvals. Meanwhile, several large corporations have halted their advertising on the platform whilst the platform “irons out the kinks”, costing them millions in revenue.

Let’s turn our attention to the second perk. Prioritizing tweets, replies, mentions, and searches of those who pay the monthly fee.

Anyone who happens to play video games will know the term “Pay to Win”. This refers to the ability to purchase (with real money) items or abilities that give them a significant leg-up in the game, especially against those who choose not to delve into the cash shop and are left to grind away for hours and hours in a sometimes fruitless endeavor to achieve the same advancement. For the most egregious examples, this often creates a rather broken economy, where Whales who throw money at their screens rush to max level to leave the Minnows behind to scramble amongst themselves in a free system often designed to be as hindering and limiting as possible.

Many players will actively protest games that are clearly designed with these mechanics in mind, and in many cases, the method considered acceptable is paid-for cosmetic items, that don’t affect the gameplay or leveling experience but are “nice to have window dressing.” Which is exactly what you could call many of the originally proposed benefits of Twitter Blue.

In the realm of Social Media, buying reach and exposure is not a cosmetic item.

Musk’s suggestion that pushing verified users’ content to the top will reduce spam and scamming accounts is hard to believe when you look at the immediate effects covered above of offering the badge at a price. What it will do however is create a divide between those who choose to part with their money and those who don’t, or in several cases simply can’t. (Not everyone has disposable income, and whilst it might only equate to a few cents a day, not every country has a healthy, fledgling economy.)

What Twitter is actually saying, is that we will suppress your content in favor of those who pay to be heard first.

For the average everyday user, most of this won’t seem important and will likely have little to no impact on their usual experience. However, if you use Twitter as a promotional tool for your small business, brand, or creative endeavors, there is a genuine risk that your engagement & visibility could be obscured by not fronting up the cash.

Now, this isn’t a new thing by any means when it comes to growing social visibility. People have been paying shady third parties for bots, views, clicks, and followers for years on many different networks. But by charging its users $7.99 a month to effectively stay relevant, Twitter has inherently baked native Pay To Win or rather “Pay To Advance” mechanics within the app’s own architecture.

Keeping Up With The Joneses

All of this sadly taps into a part of the human psyche we call FOMO. And all the platforms know it.

For many content creators, artists and startups, the blue checkmark is the holy grail. It’s a sign of validation, that you are legit and you are recognized on the platform. Up until now you’ve had to jump through hoops to prove yourself worthy. Then suddenly you can just.. buy it? Who wouldn’t jump at the chance?

Maybe you laugh it off, wait it out. Who would pay for such a thing? Then you see more and more accounts, fellow creators, or associates in your feed with the hallowed tick of approval. Soon enough, there’s more of them, and less of you. You don’t want to be left behind, do you?

The thing is.. Twitter Blue is not a badge of legitimacy. It’s a premium gym membership.

As a closing statement, Matt Navarra said it best…

And no.. I don’t have a gym membership. (OR Twitter Blue).