gm DAOpunks. Welcome to part 5 of The Full-Time DAO Newsletter. It's one of those days where am a little short on time but I have a lot to say. So, LFG.

Last week, I took a break on account of the business ... oops. busyness covering India Blockchain Week, a feast of web3 events during the week of ETH India. Naturally, a lot of updates to report on, and we will get to that. But since today happens to be DAOpunks Cohort 1 finale, I thought I'll begin with some quick reflections on my journey so far. (will be doing part 6 next week as I missed the last one)

I have extensively documented my journey and thought processes through the last 6 weeks, from my motivations for working on the things I am working on, the ideas that I proposed to DAOpunks, and if you did follow along, the evolution of those ideas, associated priorities, and my action towards it. While all that is on the table and I am working on them, I wanna pinpoint to something that really hit the nail in the head during this cohort, which is the idea of staying accountable to DAOpunks through this simple act of writing every week.

What came out of this process is fulltimedao.com.

The idea called fulltimedao.com did not exist prior to me applying for the DAOpunks grant, heck, it did not even exist as I started out the cohort. In fact, in week 1 of my task to write a blog, Full-Time DAO was the name of a newsletter on LinkedIn that I wrote for DAOpunks, and through consecutive editions, I informed you of its developments through become fulltimedao.com and eventually going live with the project. The formation of the idea is fully documented in this very series.

While it may not be a completely new idea and it definitely encompasses what was proposed on my grants application, the act of setting up this project and writing about it in this newsletter has sharpened my sense of direction and unlocked a set of possibilities of things I can accomplish through this project. A name, as trivial as it may seem, almost feels like an answer to many of the questions that I have been seeking as I came into this cohort. How so?

Let's start with my livestream idea

To be honest, my struggle was not about launching a livestream series about DAOs. Kickstarting new episodes is something I can do immediately, and the concept is not all that new from what I already do. Through this cohort, however, I wanted to do something different, which is to build a foundation for a show that I could show up on and deliver consistently, and build leverage through the brand I create around it.

As someone who is turning 34 in a few days and has a child who's turning 1 in a few months, I do not have the privilege to be working on things simply on account of passion if it won't get me paid for it. Plus inconsistent effort on a brand called #SalmanNeedsAJob isn't going to get me there. Not to mention quite a number of other things I am currently involved with that needs to be taken into consideration and I am yet to figure out how. (read: the full-time DAOlemma).

Now, there is no better time for me to use the word - amalgamation, so I am gonna go for it. fulltimedao.com is an amalgamation of many of these considerations and a framework for me to start thinking about building a career around my interests in web 3. To read what they are, check out my previous blog post.

When I first heard about the story of DAOpunks NFT from CryptoBushi and Livefast on the Crypto Sapiens Podcast, one of the things that really caught my attention is the DAOpunks Digital Licensing Agreement. As a passionate DAO contributor and NFT enthusiast myself, I was intrigued by the idea of what you can do with the IP of an NFT that's proliferating the cause of decentralized work. Moreso, if it were to be used in the context of a media project. While it was not the primary motivation, it was an influencing factor in my buying the NFT.

In my application for the grants cohort, exploring using the DAOpunks Digital License Agreement was in fact one of my proposed deliverables. Initially, I was hoping to perhaps use the DAOpunks brand name in the creation of a show about DAOs, but realized that it was a little out of scope from the licensing agreement. In the eventual weeks as I started working on fulltimedao.com; there it was - voila. DAOpunk Anon #236 is going to be the star of the show - the mascot of fulltimedao.com.

Adding to that, the brand theme of fulltimedao.com as well is inspired by the NFT (colors).

How significant is this, I don't know. But I think it's cool. And there's definitely more to be explored on this front.

Addressing limitations of the name #SalmanNeedsAJob

Salman Needs A Job has gone from being the name of my YouTube channel to literally my pseudonym on the internet. It is my primary username on all my social accounts, it is my ENS, discord id, everything. It is an identity I have created and I happily embrace it.

However, I have found that there is a limitation when you have your name attached to the name of your brand, especially if it suggests that you need a job. The name makes it hard for people to take you seriously and associate/collaborate in an official capacity. It's not impossible, it's just hard, which is where Full-Time DAO comes in. A natural extension of #SalmanNeedsAJob whose job is now working full-time DAO - made official after winning the DAOpunks Grants :)

(I am very tempted to include the details about my project whoneedsajob.⌐◨-◨ here as it relates to this thinking on the naming convention, but we will save that for the next and final edition of the newsletter.).

In short, the genesis of the idea of fulltimedao.com owes its existence to the DAOpunks Grants and the act of writing I took up over the course of this cohort. I am very grateful for it and hope to make the best of it!

Frens. The last couple of weeks has truly been a ride. I know I've been hyping up ETH India for some time now on this newsletter. Well let me assure you, it was definitely worth the hype. Over the last 2 weeks, a lot has happened, and I have been tweeting about it extensively. It's going to be hard to summarize it, so I'll try to give a chronological update with supporting tweets or screenshots of the activities to date.

Team: In the last newsletter, I mentioned that I am looking for a couple of immediate hires prior to getting started with the week of ETH India. (1) YouTube Content Management Intern and (2) YouTube Shorts Creator (bountied contributor). I am happy to report that I have found and started working with both of them. Examples of their work - 1, 2. 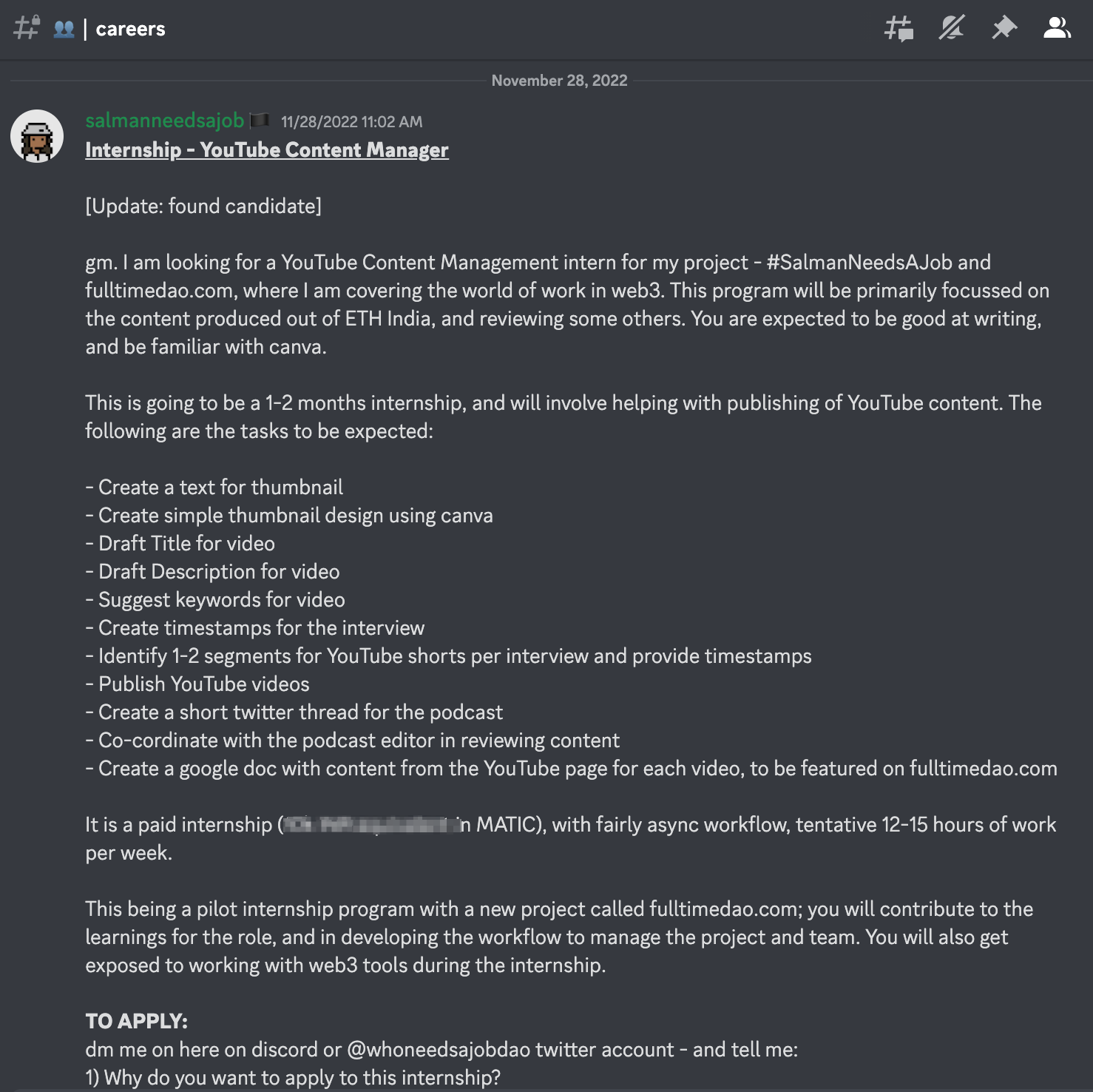 Crowdfunding: Juicebox is ready to go. All the settings have been established and will be live as soon as the first video from India Blockchain Week videos goes live.

ETH India podcasts: 14 recorded, will be published 1 a week during upcoming weeks.

Recorded around 14 podcasts this week. Will be publishing 1 a week over 3 months.What do you think. Should I publish sooner?

Real-time coverage on Twitter: During the last couple of weeks, I did something that I have not done before, which is tweet infinite times a day. The idea was to do real-time coverage of India Blockchain Week from my perspective. That meant, lots of tweets, lots of shitposting, lots of pictures, lots of videos, and more. 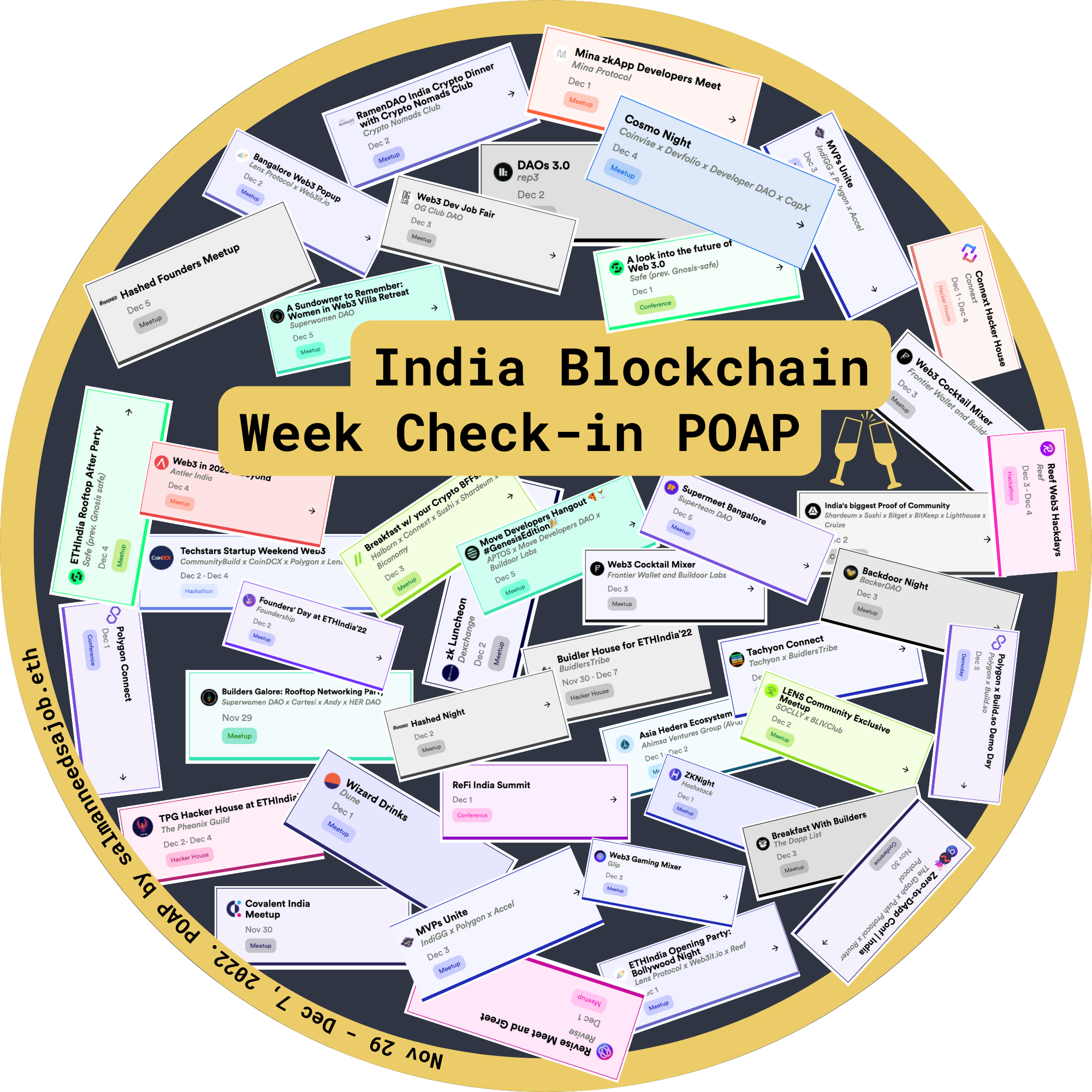 One of the more interesting things I did last week is create a POAP for India Blockchain Week, representing the 50 or more side events that were taking place across the city during the week. I also printed the physical POAP card with a QR code, which upon scanning leads to fulltimedao.com/ibc22-poap asking folks to follow a series of steps to get the POAP, which is basically to subscribe to fulltimedao.com. I must say, it was quite a wonderful campaign which got some press as well, and it was minted by none other than Sandeep Nailwal, who's the founder of Polygon. 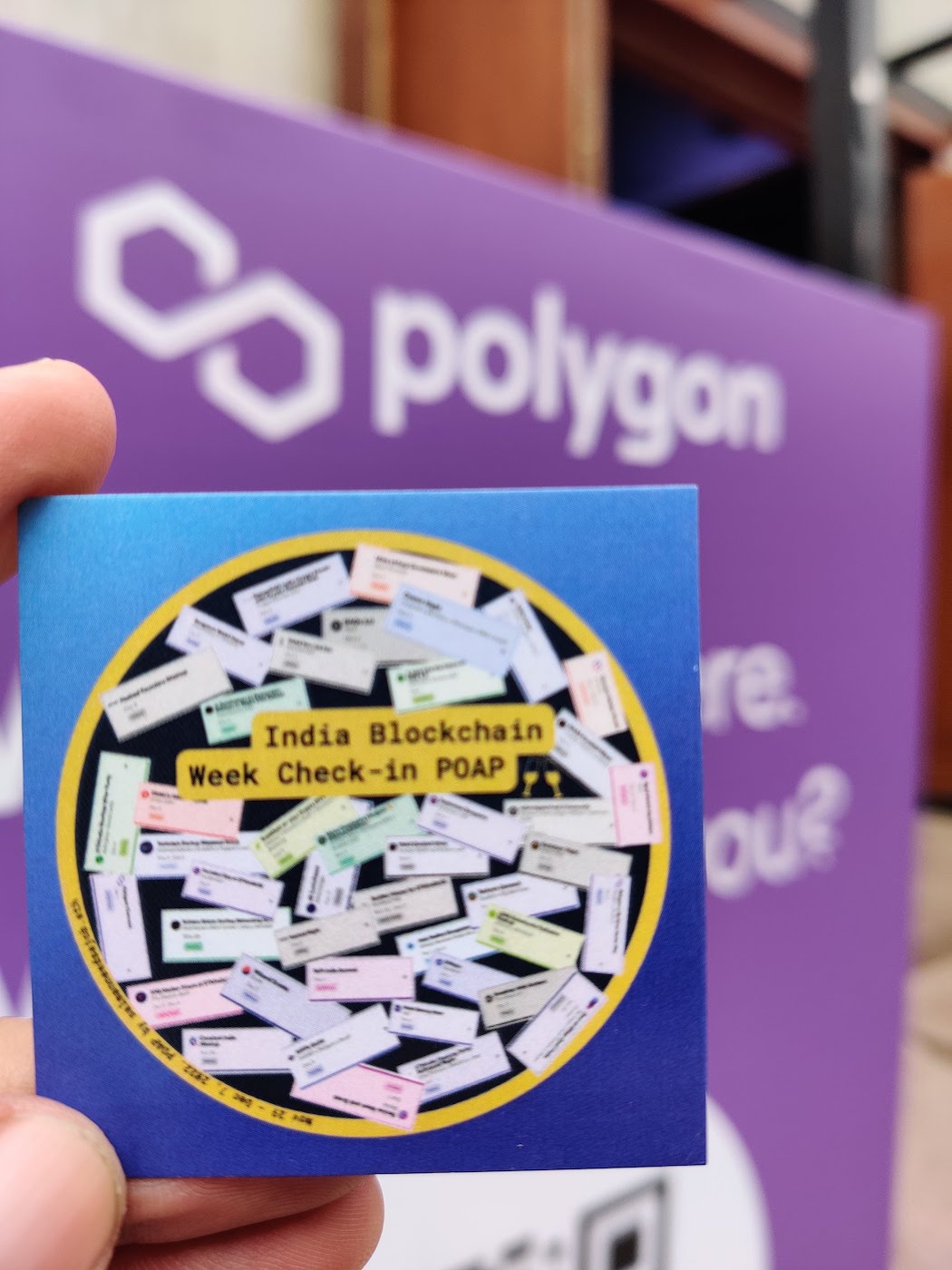 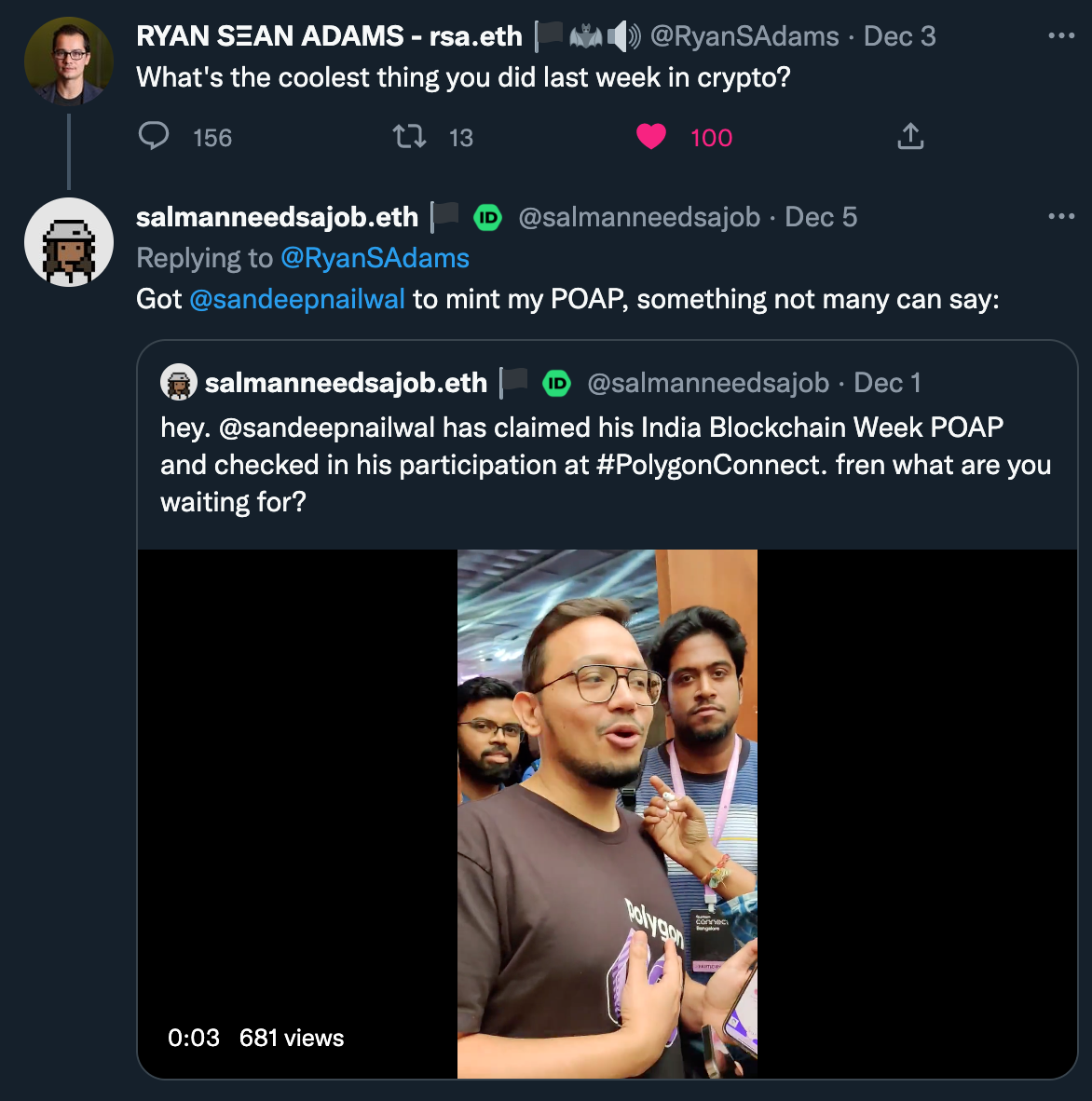 Got featured in a popular Crypto Newsletter from India called Doodhwala, telling the story of the POAP. Definitely the highlight of the week, right after Sandeep's minting my POAP. read here

holy doodhwala. I can't handle it 🤯 what do you do when you get featured in your favourite newsletter?I guess celebrate with some doodh 🍼 Woohoo 🥳 .. super appreciate this @AakashAtha and @DoodhwalaDaily fam .. 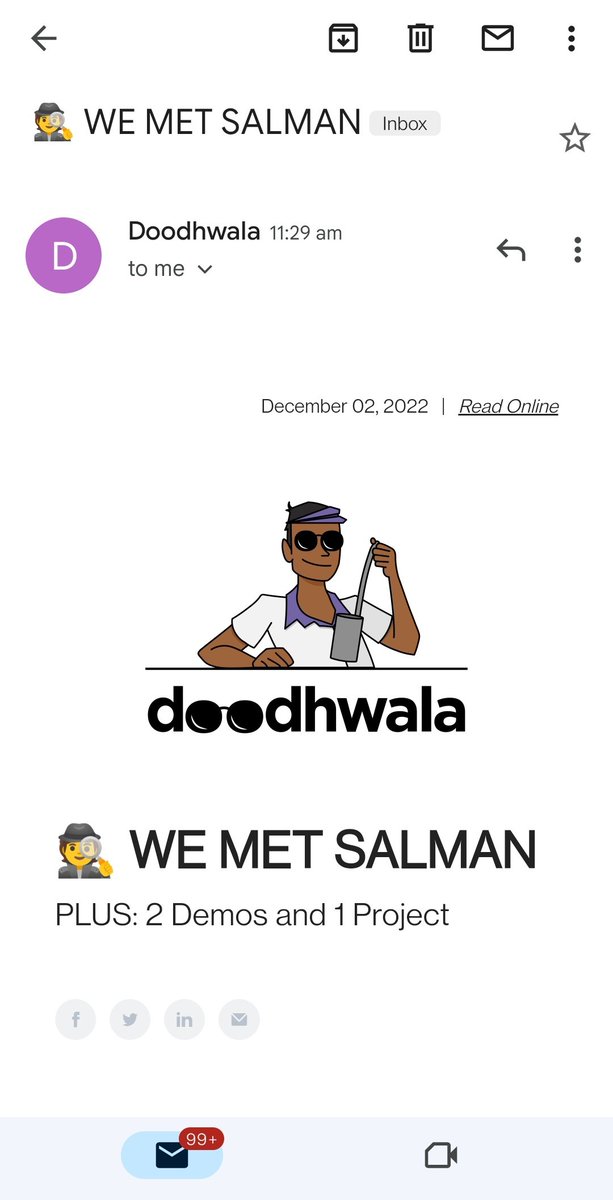 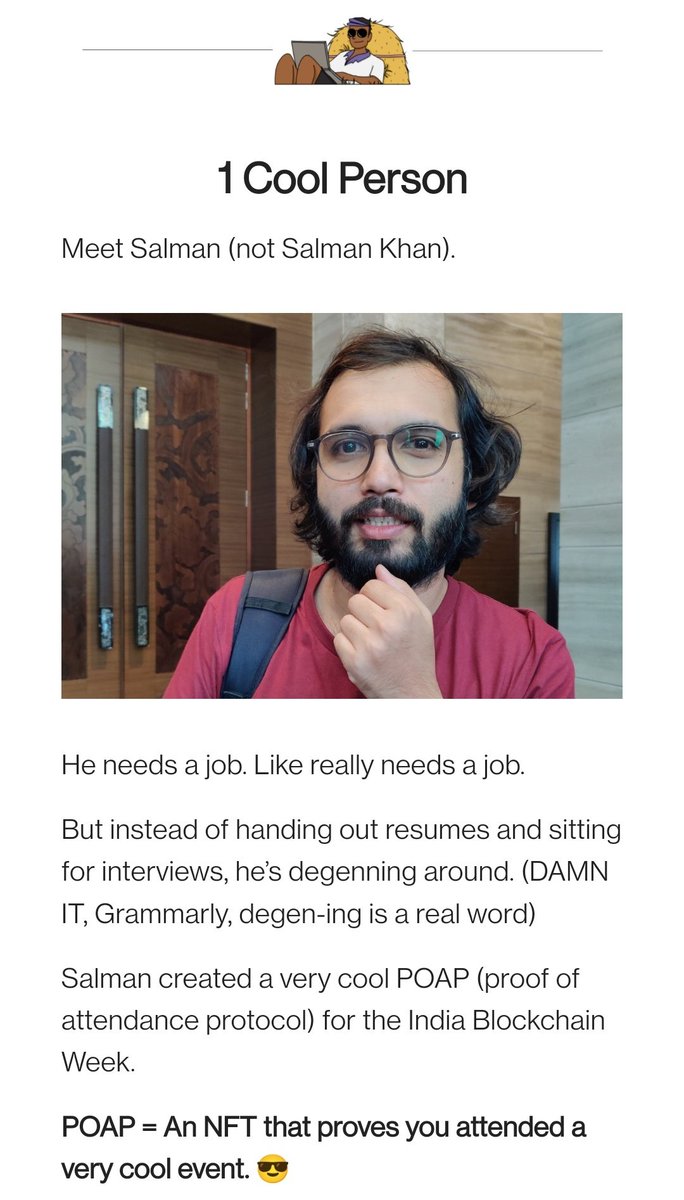 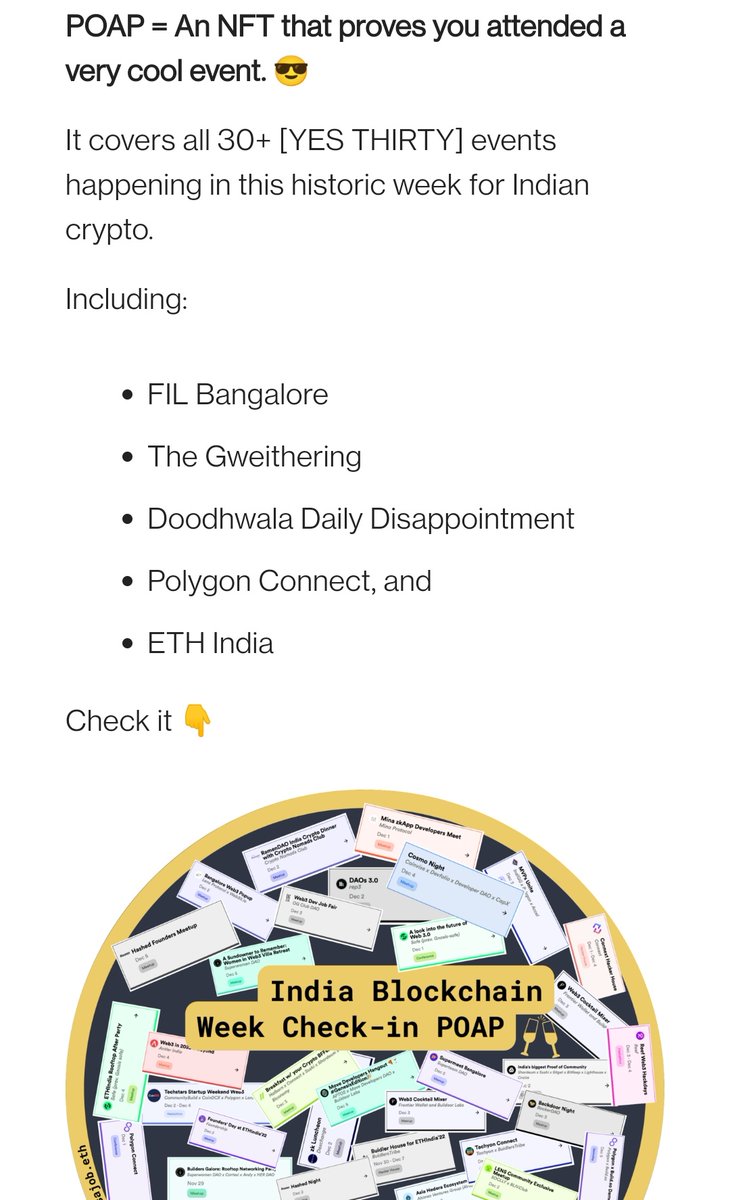 Got Media access to ETH India from Space Kayak, the creative partners of ETH India, and captured an interview about the execution of the entire event. 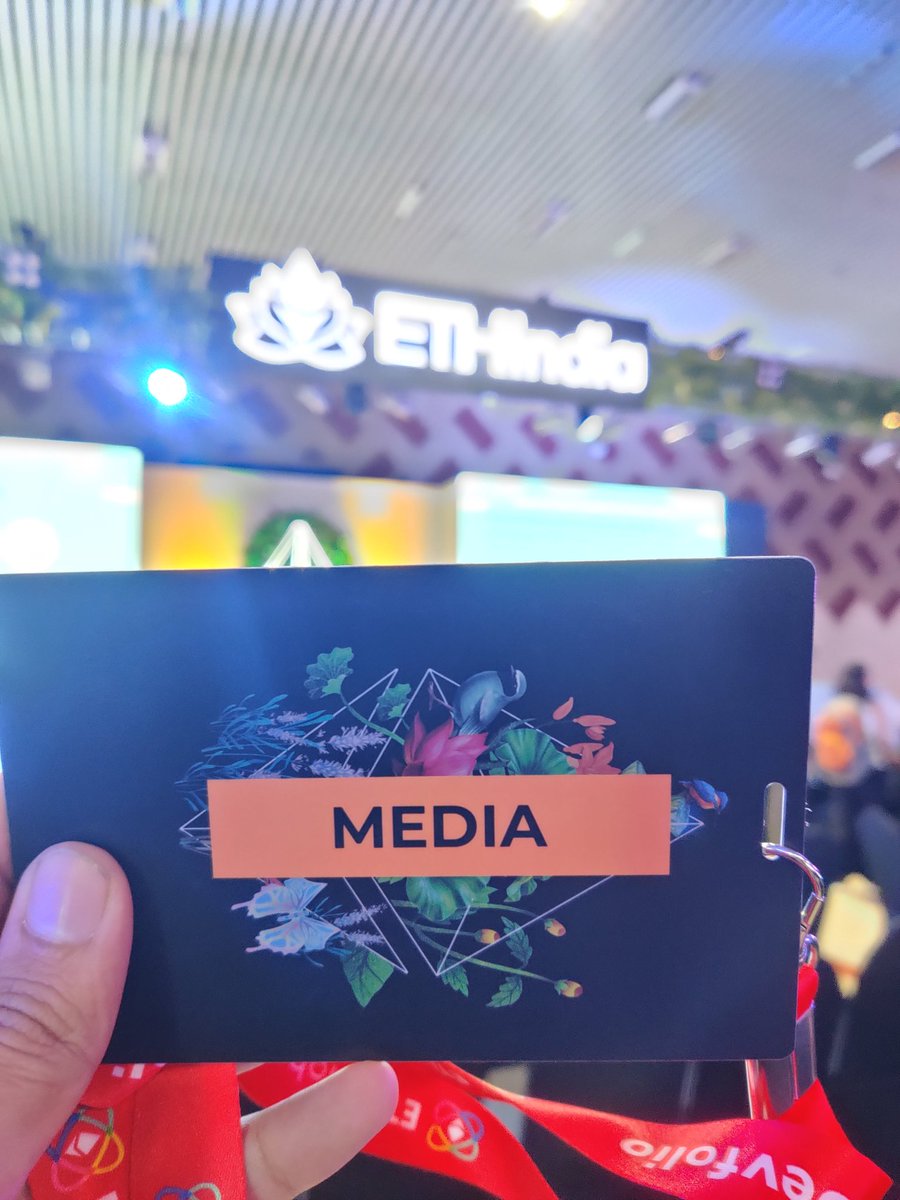 And most important of all, met many of my frens from BanklessDAO and some common web3 communities we are part of, finally IRL. How amazing.

Over the next few weeks, I am going to be very much focused on the campaign around the content from India Blockchain Week. It is going to be quite a bit of work, and I have some interesting activities in store which is probably nothing. The livestream is not going live just yet, but the foundations of it are being laid right now through the development of a team and building the Full-Time DAO brand.

While it is the cohort finale week this week, I will be coming back with one more edition of the newsletter to close out the 6-part series. A heartfelt appreciation to the DAOpunks community for giving me the grant and motivating me to pursue my dream of full-time DAO. And my gratitude to fellow cohort mates, Tyler and cryptovinci from TradFi to DeFi and Jomari from FiHub for sailing through this journey together.

To close it out, here's a picture of me on a smart mirror built by the residents of Zo House, an NFT gated house for holders of The Zo World NFT. Quite a marvel this web3 isn't it. 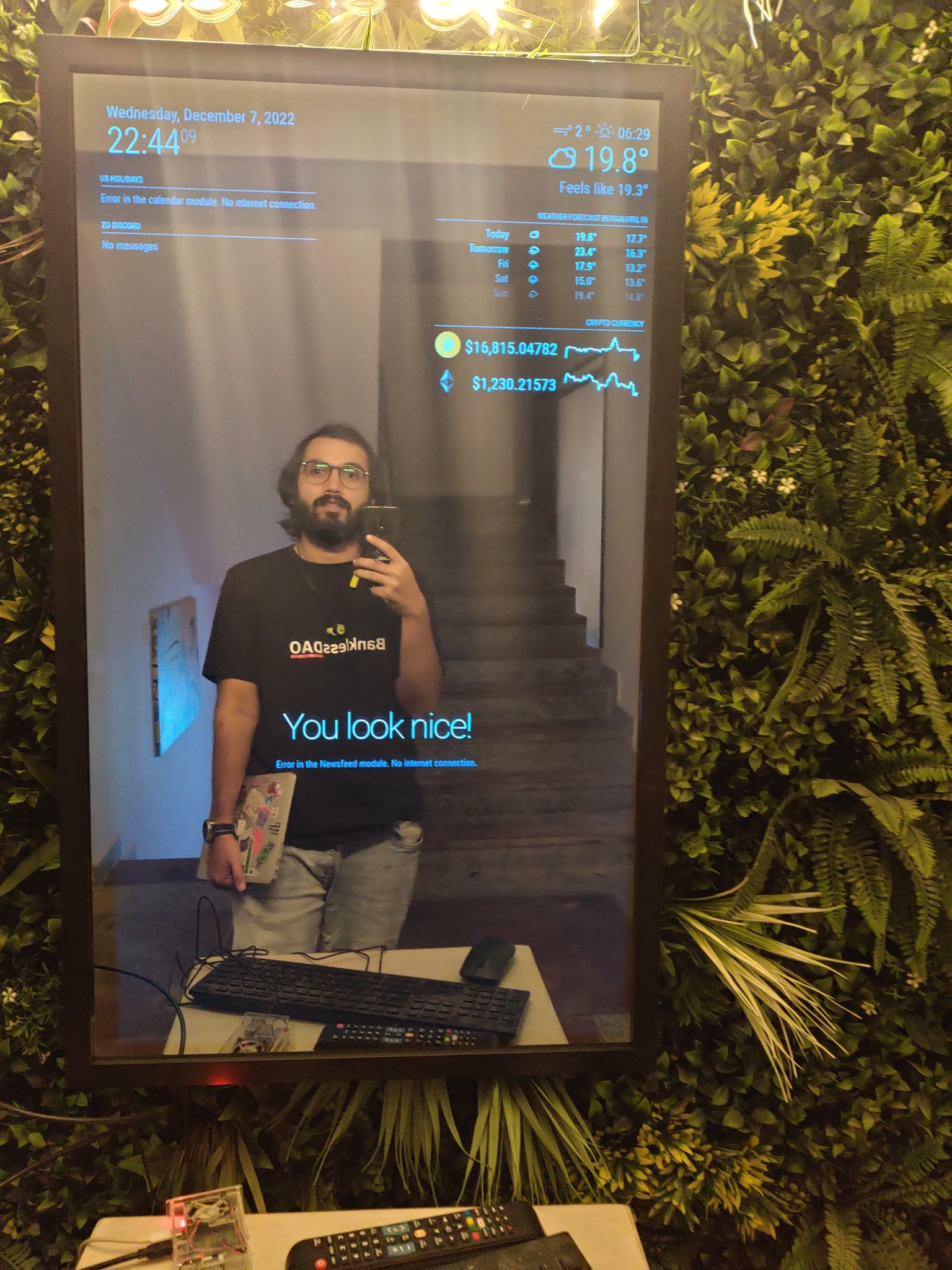