As a freshman in college, I remember hearing about the startups that raised millions of dollars to launch their idea or continue to work on their business. Coming from a low-income background, I thought this was fucken crazy. “Just give me 1 million, and I’ll be good for the rest of my life”, I thought.

I thought founders who raised funds from VC were the most die-hard and ultimate operators ever. I wanted to be exactly like them. I pursued this VC-driven dream every single year during my college career, ultimately starting over four different VC back-able start-ups. Reflecting on my experience in the start-up world, I now realize that my strengths lie in what I identify as a Venture Capitalist, not a founder. This is not to say that I won’t start my own company in the future… hint. 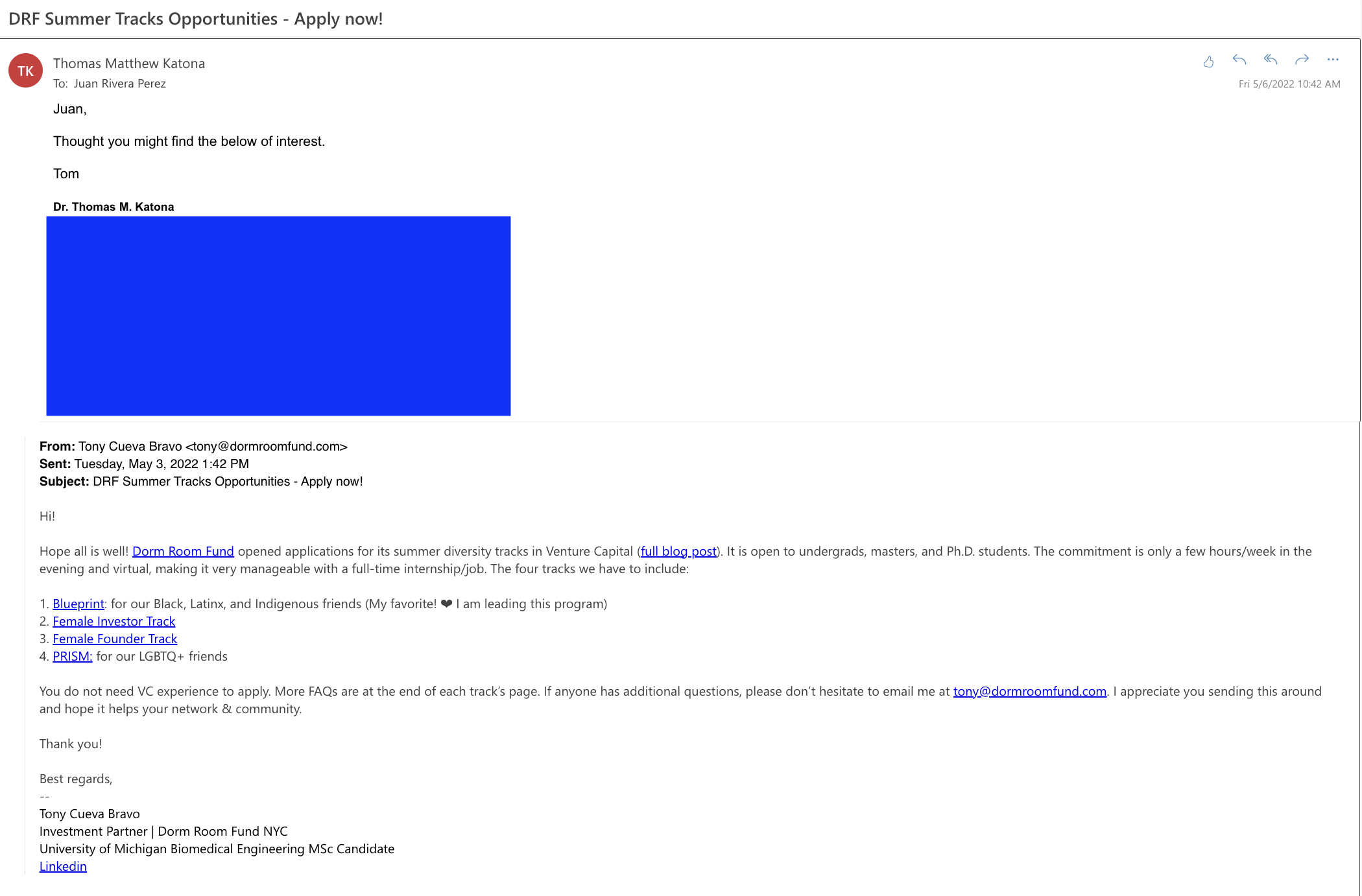 Shoutout to Tomas Katona for being one of my biggest supporters and critics; you have been 🐐’ed.

I was accepted into the DRF program, but breaking into venture capital has been challenging. During the DRF program, I learned about the lack of diversity in VC - both ethnic and place of education-wise. Furthermore, I realized that the average person who gets into VC joins in their late 20s. As a 22-year-old, this all was daunting to me. I did what I always did in the past, which allowed me to reach my goals; I ignored the obstacles and started grinding.

Where I am Today

Many of the people working in VC come from Ivy League schools. You can think of this as the old saying goes, “Your network is your network.” This was evident as I met my fellow cohort. I don’t think this is necessarily bad, but it opened my eyes to what I needed to do to get into VC.

I took two main things from my time as a DRF fellow; the underground VC mindset and friends. I learned that to break into VC; I must act as a VC. From that day onward, I started talking to more founders in the blockchain space, and this was accelerated by Farcaster. Through this program, I met my first VC friend, Andre Guardia. After the program ended, we agreed to start a new community of web3 native founders.

After my fellowship with DRF, I understood what it meant to become a valuable venture capitalist. My mentor, Chris, told me that the best way to do anything you want is to start doing that today.

After internalizing this, I started to reach out to builders in the space to have conversations with them. I simply wanted to start to create connections and begin the job of a venture capitalist. I was upfront about this with those with who I spoke, and all welcomed me with open arms. This led to creating the web3 link with VC friend Andre Guardia.

As I continue to do this, I have made critical connections with venture firms to pass on founders I feel are venture capital ready. Along with this, I have joined various investment DAOs where I can give on my deal flow to provide builders with investment opportunities.

Web3 Link started as an opportunity to speak to founders and connect them to investors in our network. Although this is still at its core, the web3 link has a bigger goal. We aim to create a web3 native and powered community of founders. We aim to create a community that is an active and high signal in which founders can benefit and contribute. At its core, community leaders will connect founders with the resources they need to be successful. Stay tuned; we have some fascinating experiments we will try.

I was recently accepted into the VFA program. This fellowship will allow me to deal with source founders in a valuable community. More importantly, the VFA network is vast and extensive. I hope to make the connections needed to bring value to founders!

Where I Am Going

I will continue to be focused on building; products, communities, and relationships. During this year, we build. I know many of you think the same thing. If you want to connect, my DMs are always open. I can’t wait to see what everyone builds.

Although I am acting as a VC, I will be looking to join the space in the mid-term. I want to have an opportunity to continue to build as an operator before committing to a role as a venture capitalist. As I continue on my current path, I will continue to generate the network and skills to become a valuable member of their venture team. The day I join as a venture capitalist will be a day for celebration.

Long-Term: Launching My Own “Story-Focused” Fund

I would like to launch my venture fund, supporting early-stage companies with powerful stories that support the bottom 97% in genuinely impactful ways. This includes blockchain-enabled technologies, but we will be open to any story. I am starting to organize my vision today, and all of my experience will directly impact the structure of this fund. It is not a matter of if but when. I plan on writing another article about this to explain further.

The reason I feel so strongly about VC can be attributed to my past scholarship experience. The only reason I am where I am today is due to the financial help of scholarships. Without it, I would not have had the time to explore and fail these past four years. Giving out scholarships, or in this case, Capital is my way of making a significant amount impact as efficiently and effectively as possible.

I will continue my grind to build products, communities, and relationships in the venture, blockchain tech, and anywhere I find myself being curious about. The world is my

Venture puts me in the front seat of my destiny while giving others the same opportunity. I don’t think venture is the only way I could do this. I would like to go into politics one day, but that’s for a later blog post.