The future of smart contract development is composability.

Last year I was experimenting with keeping NFT metadata entirely on-chain when I hit the 24kb EVM smart contract size limit. This limitation led me to try various workarounds like deploying libraries and additional contracts that call each other. It was messy to maintain and a nightmare to iterate on the contract code.

Searching for a better way, I stumbled on the (EIP-2535) Diamond Proxy Pattern, created by Nick Mudge, which changed everything. Upgradability, infinite contract size, shared contracts. My mind was blown. 🤯

Since then, I've used the Diamond Pattern in all my smart contracts. Along the way I've developed a bunch of command line scripts to swap out functions ("diamond cuts") and automate some of the more tedious parts of iterating on and testing contracts. But it still felt clunky. And that's why I developed EPM.

With a few clicks on a webpage, combine smart contracts created by other people (or myself) into my own contract. Maximize re-usability, minimize attack surface, and DRY.

With EPM you can deploy a Diamond Proxy, attach facets to it, and then get even more granular by toggling functions on or off!

Note: You won’t be able to edit anything since you don’t own the contract. 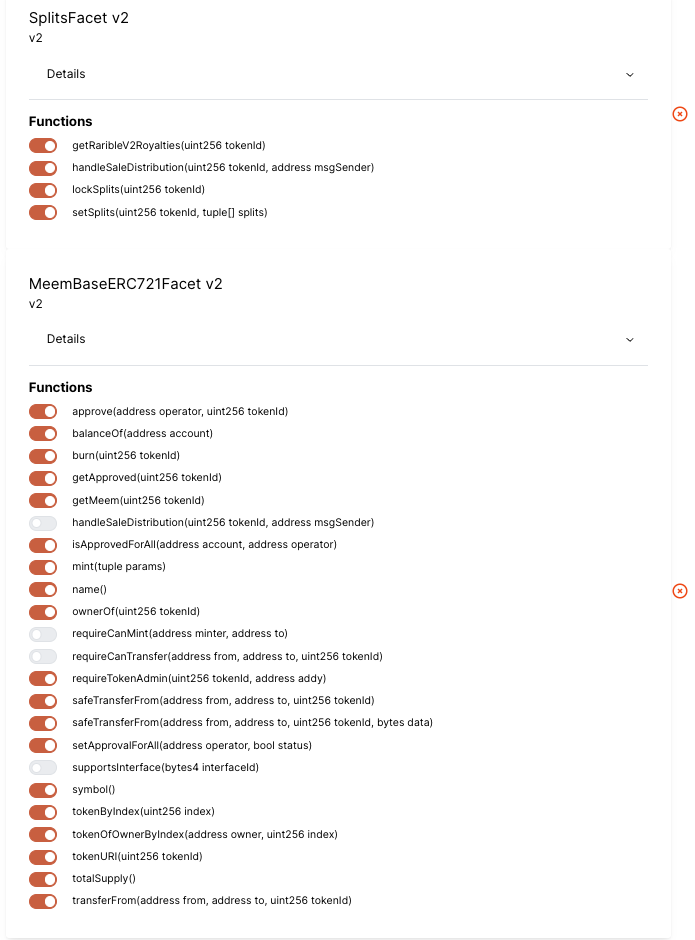 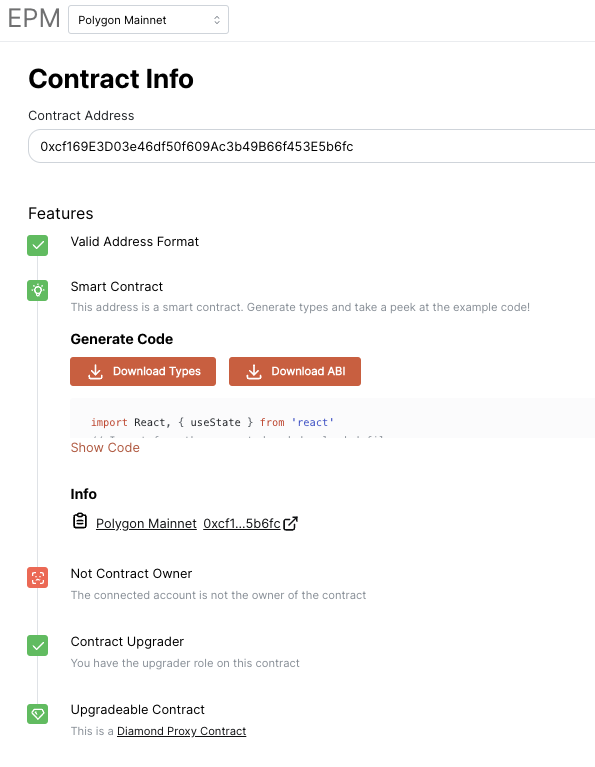 Another area of development I found tedious was generating Typescript types for my contracts. With EPM you can download the combined types or ABI (all facet ABIs concatenated) with a click. Just for good measure, there's also a code example of integrating into a React app.

Combine facets, toggle functions, and save that configuration for easy deployment by you or someone else! 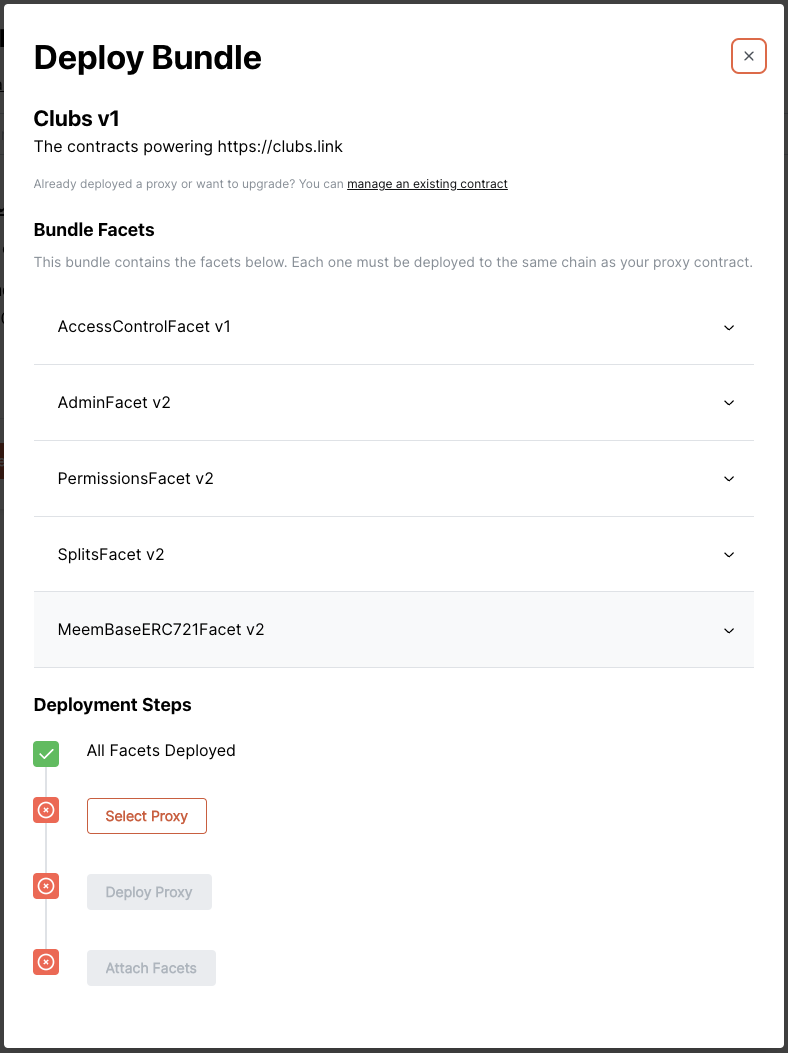 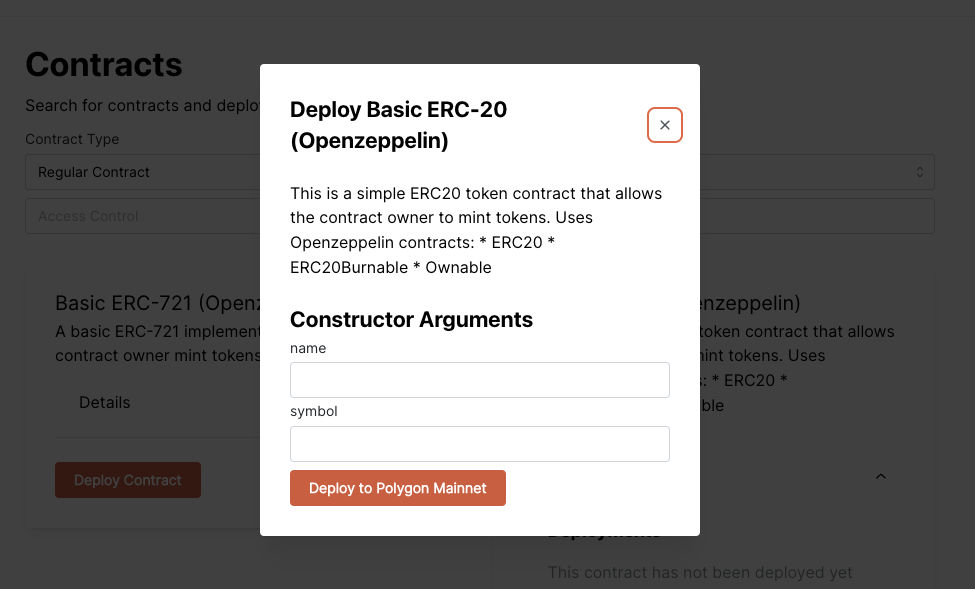 EPM supports uploading and deployment of any smart contract. That means you can also use it for non-diamond contracts.

These don't have to both be contracts written by you. It could be that BaseFacet was uploaded to EPM by someone else. You just need to create OverrideFacet with a single function.

The catch with using this pattern is that it requires you to call the function a little differently in the base contract:

A simpler use case would be keeping an NFT mint off until a contract admin manually flips the switch on by enabling the corresponding function on the Diamond.

It may already be obvious, but it's worth reiterating that Diamond Facets can be shared by multiple Diamond Proxies! This reduces the amount of duplicate code that needs to be deployed and by extension lowers deployment costs.

Nick Mudge just wrote about this

I'm part of Meem, a group of amazing people working to define the relationships between assets and humans with smart contracts. One of our other projects is Clubs which provides tools for online communities.

Behind the scenes, Clubs is using EPM and the Meem API to manage contracts and upgrades. That means you can start with a Clubs contract and customize it with EPM to suit your needs. For more info read how to Customize your Clubs Contract with EPM.

The most up to date information about EPM, Meem, and Clubs.

It’s still early and there's a bunch of improvements that can be made to EPM. Just a few that come to mind are...

Have an idea? Want to help develop EPM? Let's chat!