Even though RektSkulls is positioned as an NFT project and targets NFT/GameFi community - it launches as a ready-made utility NFTs + Token ecosystem, with GameFi and DeFi elements, such as multi-level staking and in-house auctions system.

There are three main elements of the initial ecosystem:

Unique 1/1 animated PFPs, drawn by the founder of the project - readydegen1.eth (as well as all other visual elements of the project at this stage). Skulls are inspired by crypto narratives, pop culture, and games.

Each skull will have some unique plot behind it and unique animations. We really hate when NFT projects put their collections together from a set of meaningless, not connected between each other traits, and as the end result they get a monkey in a Hawaii shirt, holding a bazooka and wearing a medieval helmet (any resemblance to real NFTs, living or slow rugged, is purely coincidental).

From an utility perspective Genesis Skulls will be one the most important parts of the RektSkulls ecosystem, as the only source of essences emission - utility NFTs that will be covered next.

Essences are the main resource of the RektSkulls project. They are utility NFTs with a maximum supply of 10k.

There are 4 types of essences, with different chances of minting and different staking power.

The main mechanics - requires essences to be burned, thus, along with staking, creating a constant demand for them. 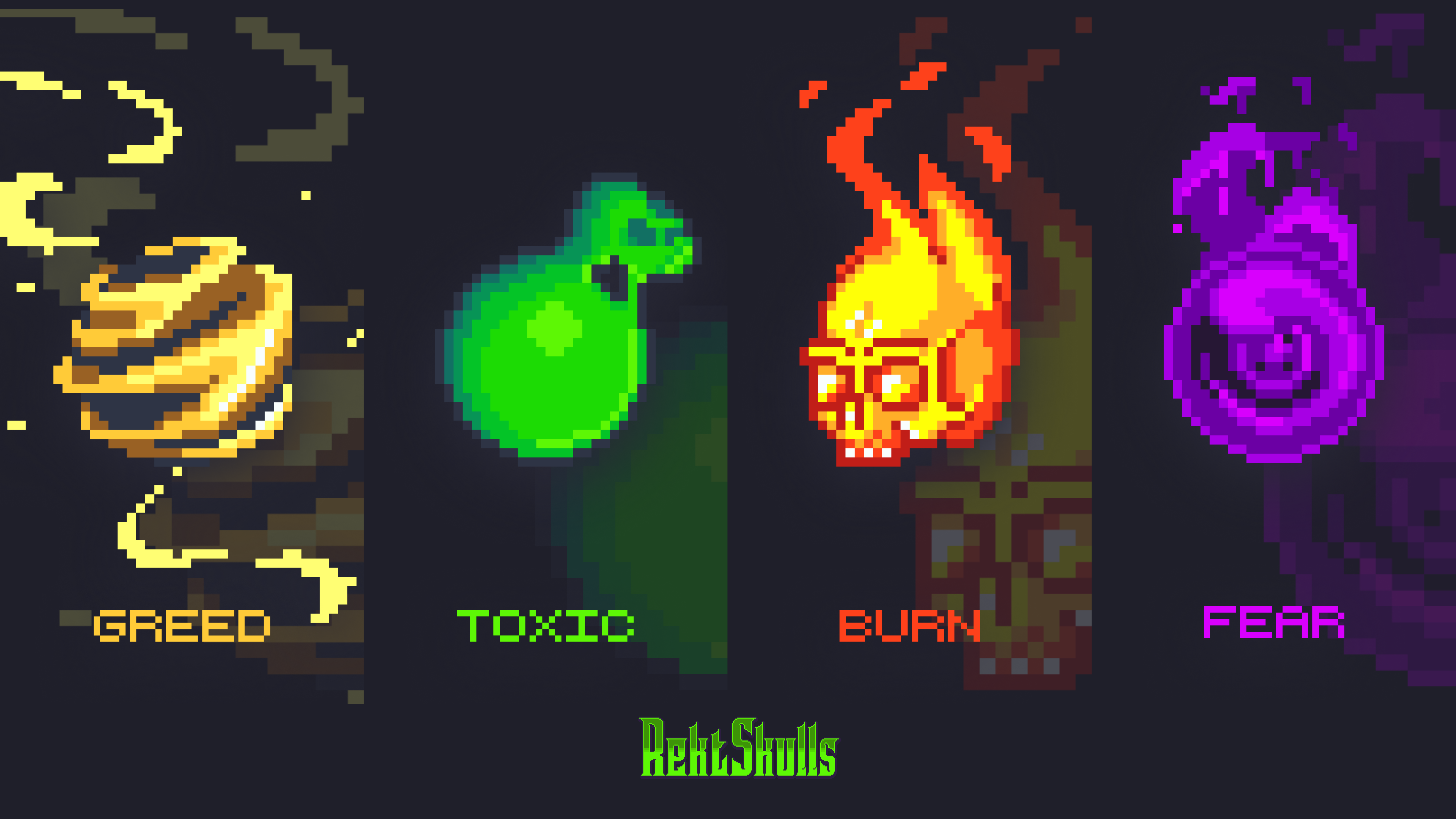 The native token is the key part of the RektSkulls ecosystem; every product, service, and mechanic within it is paid for by utilizing $REKT tokens. It will also serve as a currency in the coming game.

We believe that allocating huge amounts of tokens to Team/Advisors/Ecosystem fund/etc. creates constant psychological (and selling) pressure on token whilst it also artificially inflates FDV.

Instead of allocating a big part of the supply for ourselves - we will have a token tax mechanic, that will provide funds flow from ecosystem activity. 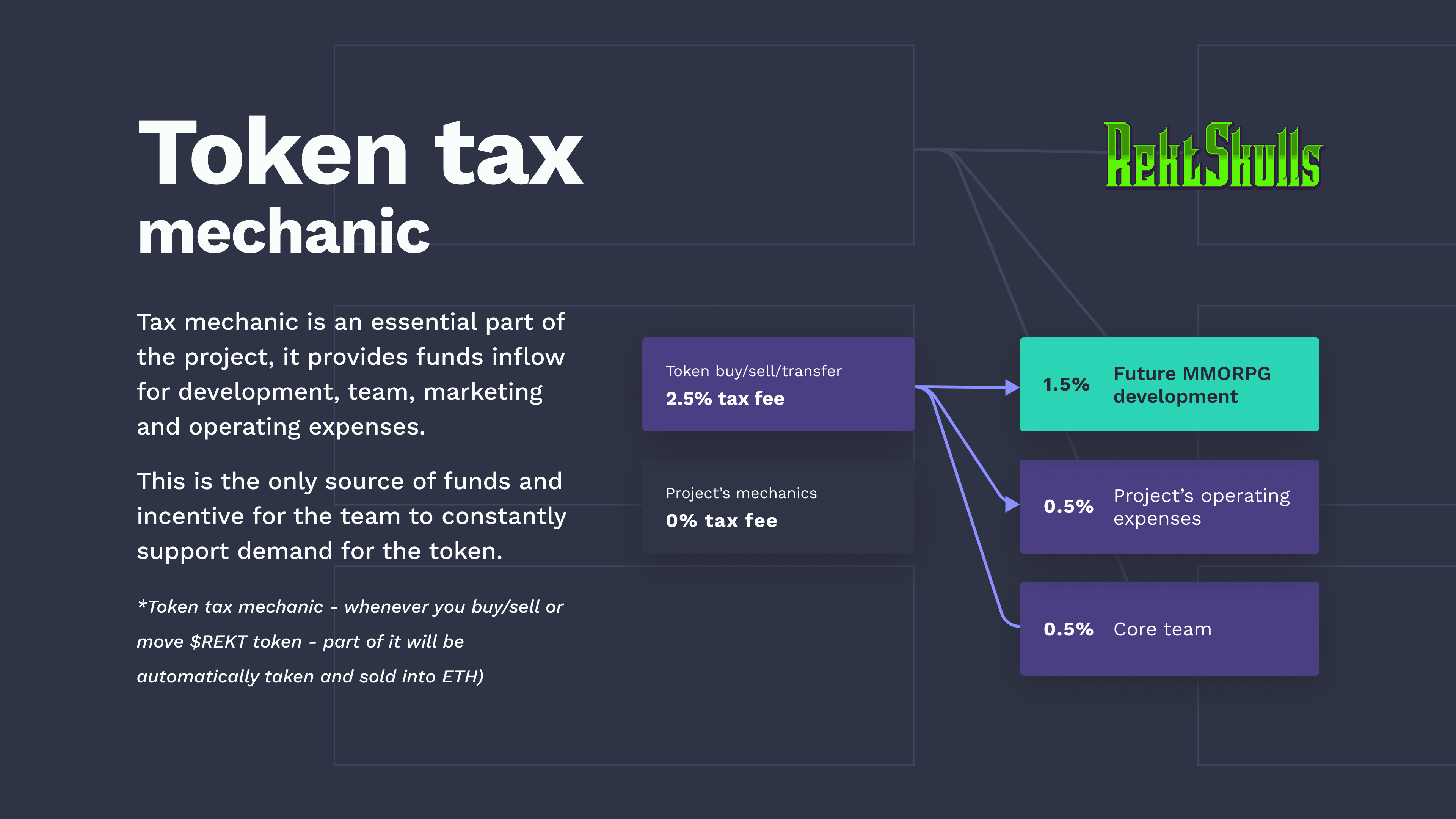 This is the only source of funds and this puts us in a position where we need to always support demand for the token.

We will remove token tax for our internal ecosystem mechanics, such as participation in auctions or secondary collection drops.

At the basic level, the core system would work like this:

Why are we launching RektSkulls?

The product/ecosystem that we are initially launching is just an initial stage of our project. Our first big goal is to earn enough funding to start the development of an MMORPG.

We are not going to reinvent the bicycle or disrupt the world of gaming, we are aiming for a classic MMORPG gaming experience powered by the blockchain-based player-owned economy with DeFi elements.

It will be a visually simple but stylish top-down pixel MMORPG. Instead of promising AAA-level game (and “never” delivering), we will focus on the gameplay and economics part. We believe that at this point in time, the space doesn't need an innovative product; it needs a simple game that plays well and is fun.

However, you have already seen dozens of similar promises, so what makes our project unique and why should you believe our promises?

We are trying to apply the fair approach to fundraising (as well as to every aspect of our project development). In fact, we are not doing any fundraises or paid mints. We don't allocate part of the token or NFT supply for ourselves. Our only source of funding is ecosystem activity, through the token tax mechanic.

For this reason, we are launching a ready-made ecosystem (we call it “degenomics sandbox”, and at the first stage it is totally blockchain/DeFi based), with interesting mechanics that you can interact with whilst we gradually release new mechanics and events to maintain community interest and a smooth transition between a blockchain-based economy and a game-based economy.

We believe that raising money through NFT sales (or through VCs) and then leaving the community without any utilities and mechanics to interact with for months/years of game development is really bad practice.

I’ve been in the crypto space since 2017 and I have seen crypto from different sides: as an investor/degen, as part of a crypto incubator with a turnover of hundreds of projects, and as part of a project with its own product and token. I have seen how shady this space can be, how unfair projects are to their holders/community, and how business interests can be opposite to community interests. I may be naïve, but I want to try and build my project openly and fairly, building the project's economy in a way in which tools allowing unfairness and shadiness are non-existent.

Royalties are the topic that worries Crypto Twitter a lot lately. We share the idea that royalties are a cool and important mechanic, but it is also obvious that rational actors will keep trying to trade without royalties and more and more services will appear that provide such option.

That’s why we are not relying on royalties as part of the funds' flow; we will set royalties to up to 2.5% (just to match OpenSea's fee) and will use all collected funds to support our ecosystem. This will happen through buybacks of $REKT tokens, burning of supply, or adding liquidity (we are considering which approach is better for the ecosystem).

How are we going to launch?

First, the purely blockchain-based stage of RektSkulls will be launched in the following order: