Welcome to the Trove marketplace recap. This will be a bi-weekly post breaking down all the action happening in the Treasure ecosystem. Each summary will feature price movement on projects, upcoming events, and potential catalysts. 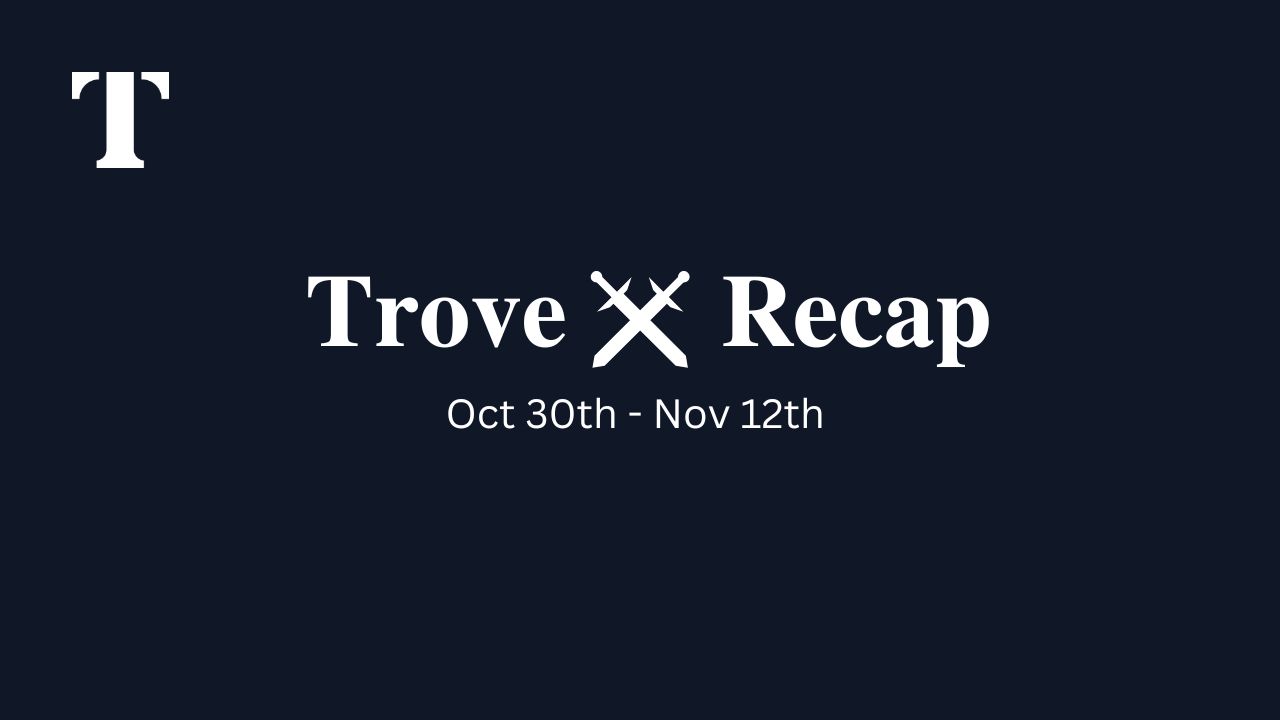 Pretty hectic week in the crypto markets as FTX filed for bankruptcy and the market fell with the fears of knock-on effects from the financial collapse of FTX and Alameda Research. $Magic started off the week at around $0.50 cents but fell to around $0.27 cents after the FTX news.

Now on to the cartridges:

Smol Brains have been getting solid volume this week with prices sitting in the 1500 $Magic range. We observed a few high Smol sales this week, with a Pink Smol going for 20k $Magic and a super rare 1/1 Smol going for 75k $Magic.

🔥 SMOL BULLISH UPDATE 🔥A 1/1 @smolverse Smol was just purchased by the great @sicklifeszn for 75,000 $MAGIC / $20K USD equivalent EEEEEEEEE 💜We continue to build and grow in this market! We're not here to take part, we're here to take over! Don't fade the Smols ✨♻️ 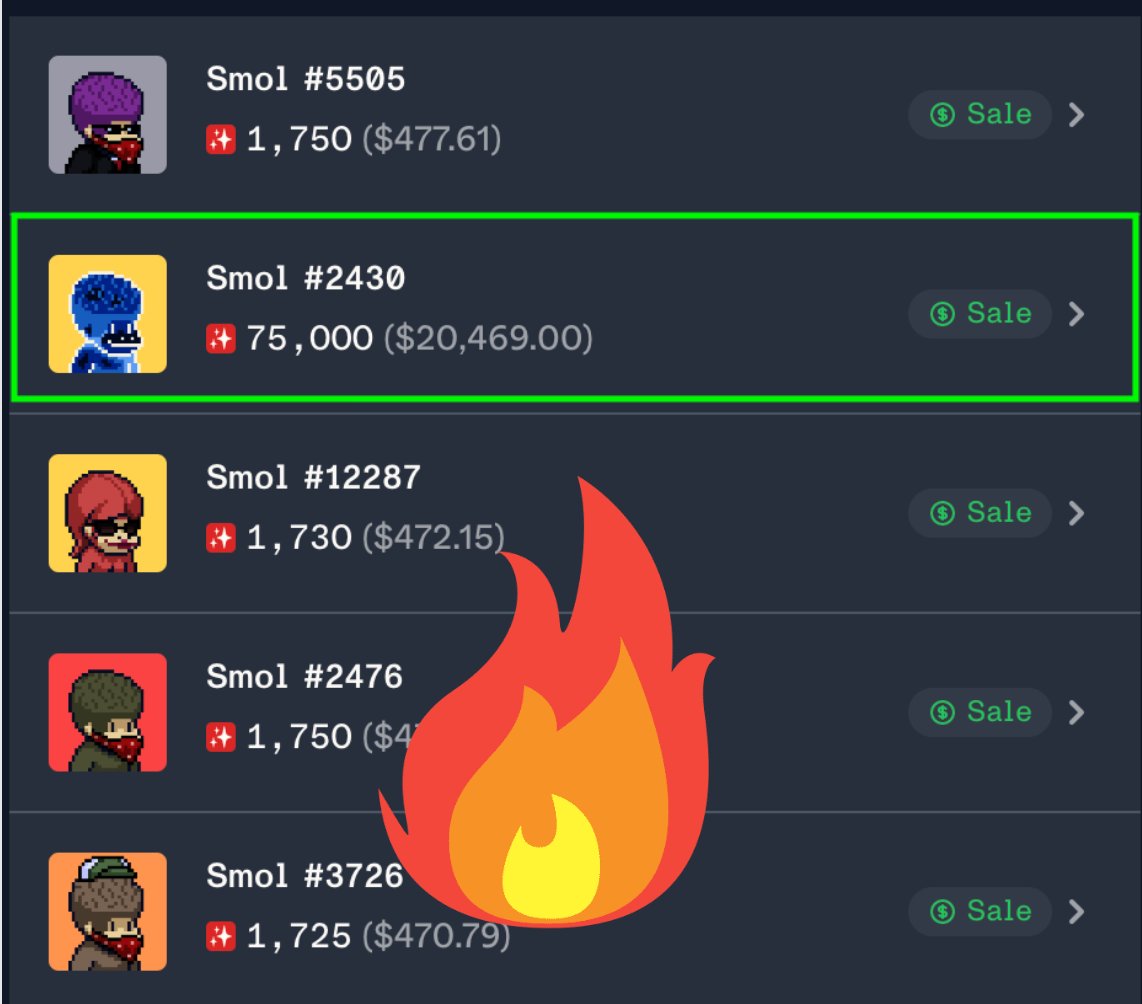 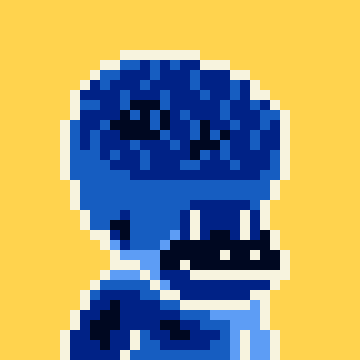 The bad news for the week was FTX megaalo-rug + Universal Locks NGMI for corruptions first release. (note to self: pegs and exchanges aren't safe!) The good news? Aux floor prices are the same as before & there remains still steady progress on corruption development! (Less losses are the new win)

Some thoughts on BW & where it stands in the Treasure ecosystem:

What makes a game fun? 🎮We think these are a good place to begin:✅ Community✅ Strategy✅ RewardsSpeaking of rewards...👇 #soon@Treasure_DAO @arbitrum 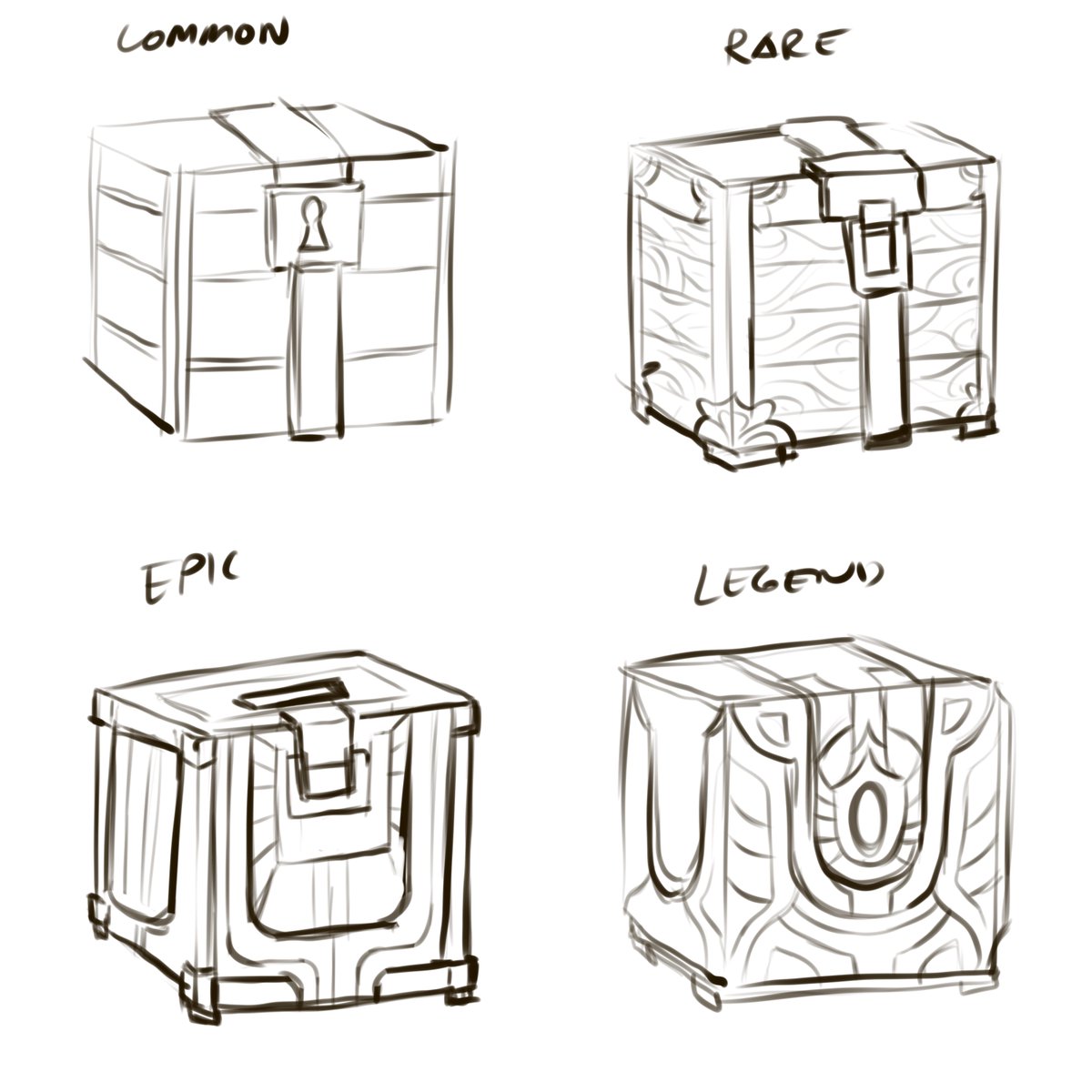 Price action of $ELM and all staking pools

Price of $ELM skyrocketed since 5th Nov going from $0.34 to ATH $6.5 (1 $ELM to ~12 $MAGIC) on 6th Nov. Due to macro market conditions, the price has fallen to $1.6 as of now but is still trading at 1 $ELM to 5.7 $MAGIC at the time of writing. Total ELM staked in single-sided ELM pool was at 98k $ELM on 20th Oct, and dropped to as low as 71k $ELM on 4th Nov. Since then, the pool gradually gone back up to the low 90k range. On the other hand, the MAGIC/ELM staking liquidity pool (LP) experienced a huge drop on 5th Nov, going from 71k to 37k LP token staked presumably due to the price hike of $ELM on the same day. The LP has now reached ATH at 74k LP tokens. 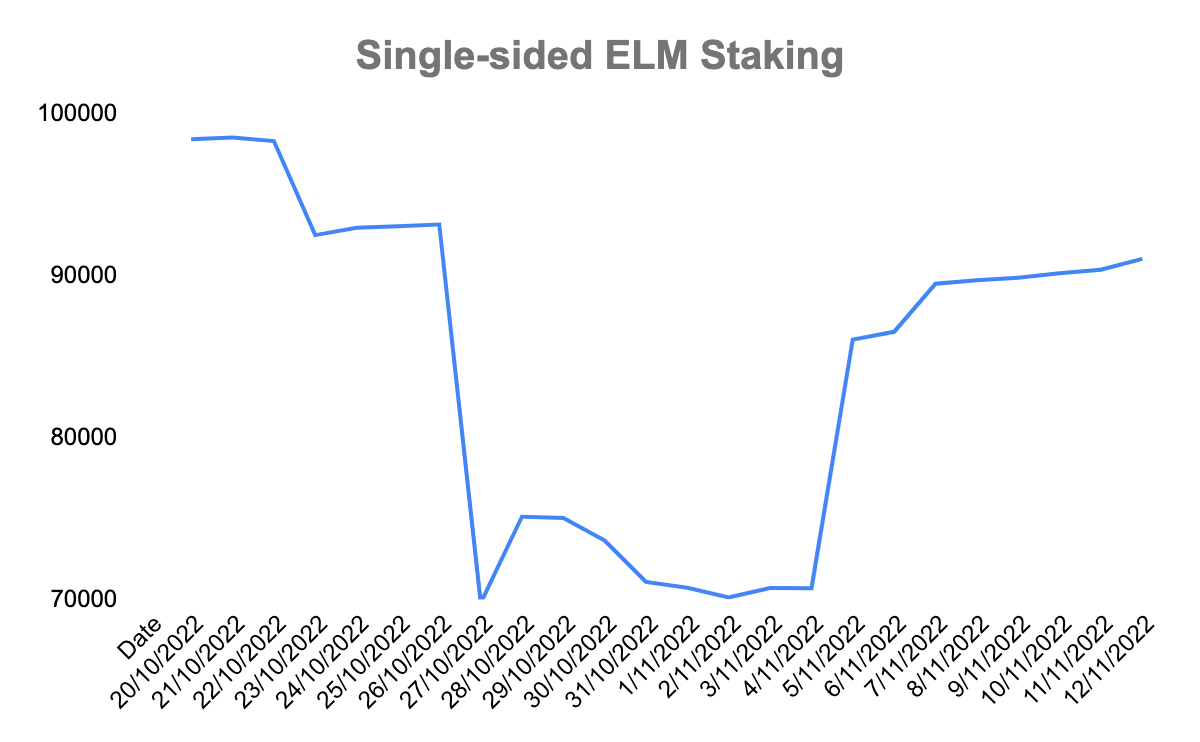 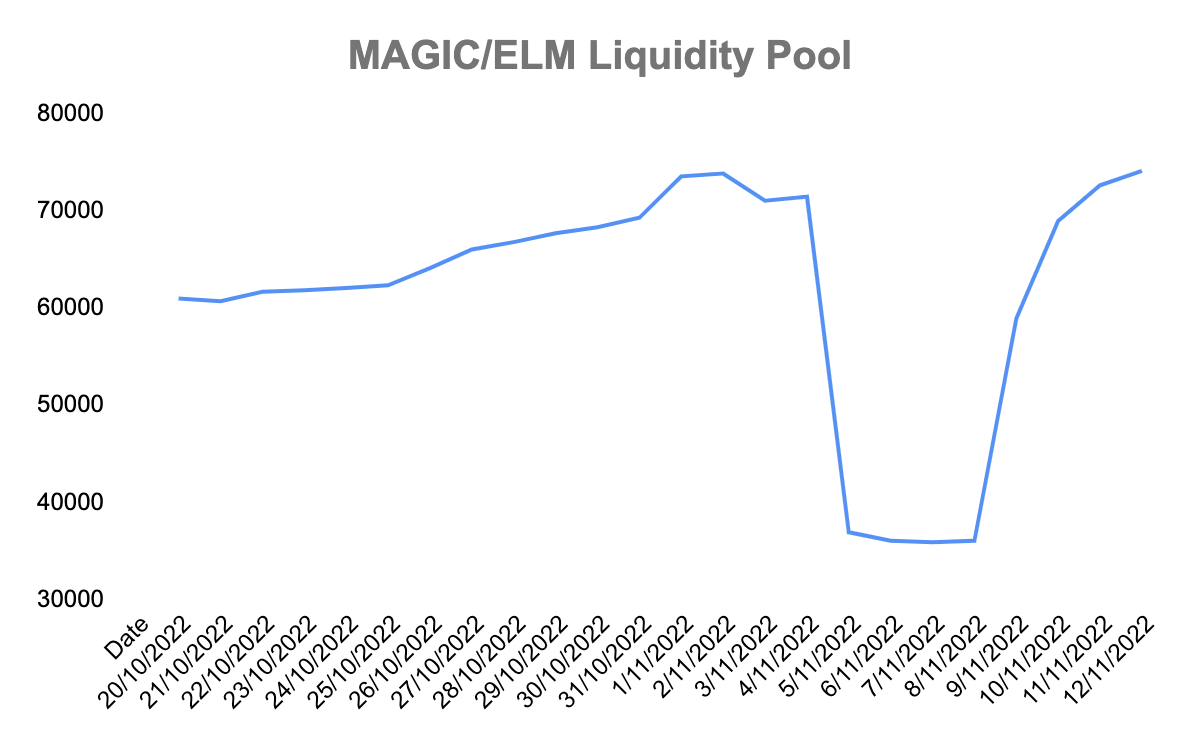 The price of class-specific (CS) heroes spiked in the recent week and remained at around 2.5k $MAGIC. CS heroes with main stat <90 used to be priced at ~1k $MAGIC before the $ELM run. There are currently only 9 CS heroes listed with only 1 with a main stat >94.

Floor price of common heroes went from 70-80 $MAGIC to 220-250 $MAGIC in less than 2 weeks. Level 2 and 3 heroes are currently sitting at 650 and 1000 $MAGIC. There are currently only 5 legendary heroes listed and the floor for them sits at 1700 $MAGIC. In general volume of heroes dropped a lot since last week but the floor price stood strongly and there is no sign of an increasing amount of listings. The current highest sale is at 5555 $MAGIC, which is a level 5 100-strength CS warrior. The cost of $ELM to level it up from level 4 to 5 cost ~4500 $MAGIC at the time of sale with a 10% chance of failure (All $MEDALS and $ELM would be lost in the event of failing). Congratulations to both the buyer and seller.

Same as heroes, the price of more premium relics kept increasing since the pump of $ELM. Vials of mysterious blood - bottleneck of most crafted relics - are getting increasingly more expensive even though 200 of those are emitted daily via exploration (pooled-based emission) with level 3 heroes. Price of it has almost doubled from ~1.2 $MAGIC (~1 month ago) to ~2.4 $MAGIC as of now.

Price of most scrolls has already at least doubled compared to 2 weeks ago. Most notably, chaos scrolls used to go by ~70 $MAGIC while the most recent sale was 225 $MAGIC (currently there is a 199 $MAGIC bid on 8 of them); Several cursed scrolls were also sold at 300 $MAGIC recently.

Price of more premium scrolls, exalted scrolls, also went up from ~350 (~2 weeks ago) to 700 $MAGIC (with the exclusion of bids accepted at 400 $MAGIC). Surprisingly, other premium scrolls such as lesser positive, blessing and miracle scrolls are having a much lower volume than exalted scrolls and close to none of them are listed. The highest relic sale was made yesterday, where a Plague Doctor Secret (PDS) was sold at 1500 $MAGIC. This relic is by far the rarest relic in Tales of Elleria and could revert the negative rolls of a cursed scroll (+60% -10 or 40% +10 on a random stat, truly degen scroll with negative EV). There is currently only 1 PDS on-chain priced at 2000 $MAGIC.

Secondary mint is around the corner. The team hinted that the next collection could possibly be minted with $ELM and $ETH. With more use cases/sinks for $ELM, we might see higher volume in $ELM trading once again. The price of secondary mint is not revealed yet. A community member in the discord group has claimed to find the contract for the secondary mint and rumored that the chance of minting CS heroes would be at around 8% (as opposed to 10% in the genesis mint). The team has repeatedly stated that genesis heroes are on average superior to secondary mints.

Batch questing. The team has teased that such a feature would be live very soon and whales could send all their heroes in batches which could be a tremendous time-saving QOL update. The team has hinted at a $ELM penalty for players using such a feature but has not confirmed the exact number. Nevertheless, this feature could possibly increase the utility of common heroes now that Adventure Begins (easy quests) always have +EV in $MEDALS.

Collaboration. The team also hinted about an upcoming “partnership” in discord while Smashe has recently called out Valhalla, KPRverse, and ETHER on Twitter. Maybe? Maybe not?

BattleFly has seen some good volume this week. Regular BattleFlys are currently sitting at a 65 $Magic floor (at the time of writing)  BattleFly Founders V1 are at an 8,969 $Magic floor with only 4 listed. Founders V2 are at a 1,944 $Magic floor with 14 listed. People seem to be preparing for the launch of the main game (Reminder BattleFly will be a part of Arbitrum Odyssey whenever that returns)

How to get Wasteland NFT?

Benefits to the Wastelands:

Conservative example (this is only an example, should not be taken as the truth)

Bullish example: (this is only an example, should not be taken as the truth)

Knights of the Ether:

KOTE has been moving over the past week. Knights Squires, Potions, Rings, and Trinkets are all up a bit.

The shops are coming. Jeweler, Alchemist, Blacksmith. The shops will decrease the supply of items and $FIEF as people use them to make upgrades.

Imbued Souls have been pretty stable around the 150 $Magic price. Skill Reset Potions are sitting in the 3.5 $Magic range.

We saw the launch of Life's Colosseum of Phanes (COP) discord PVP experience this week. The first season will run for 28 days.

After reaching a 70 $Magic low in early October, the floor price of Toads increased to 190 $Magic amid higher volume and a very low supply (as less than 1% of Toadz are currently listed). Furthermore, the total volume on Trove reached the 1 million $Magic threshold, highlighting the importance of the collection for the Treasure ecosystem.

Meanwhile, the positive momentum was less strong for Toadstoolz Itemz as the floor price remains below 1 $Magic.

The volume of Lost Donkeys has started picking up since the last week of October and it was only natural that the floor price would pick up too. After staying flat at 30 $Magic for some time, the floor price for Donkeys is now 105 $Magic (a 250% increase !). Notably, a rare Smol Body Donkey sold for 500 $Magic.

Meanwhile, the price of the Lost Barns also picked up, despite a relatively low volume, and the floor price is now at 15 $Magic, up from 10 $Magic recently.

Moreover, the team also announced that the Smol Brains will be part of the Lost Donkeys game!

📢 EEEEEEEEEEEEEEEThe Smol Brains will help the Donkeys in their quest!!! Heeeehaaaaw @smolverse 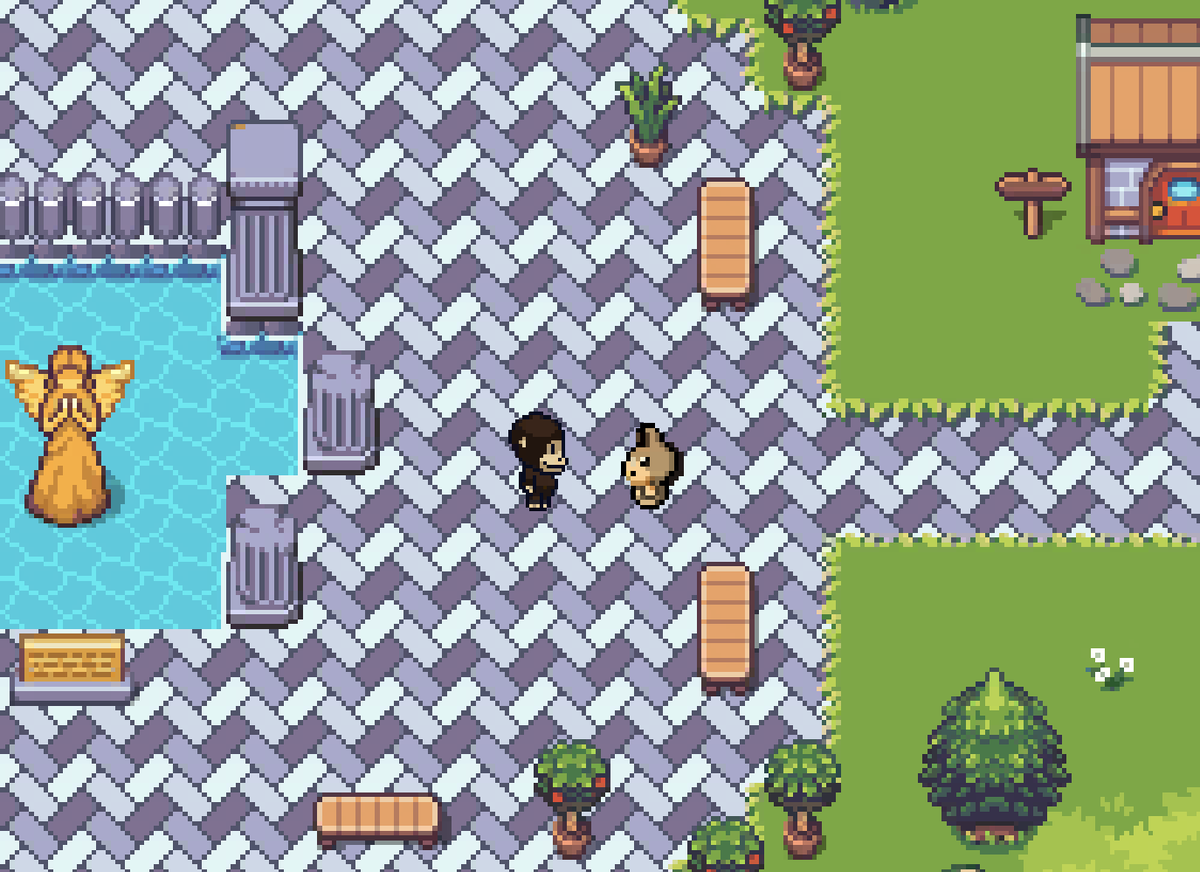 Thank you all for reading. This will be a bi-weekly report so look out for the next one

Check out some amazing game guides by Treasure Hunt:

Check out all our amazing writers and give them a follow:

Disclaimer: Treasure Times is not affiliated with Treasure, Trove, or any project mentioned in these summaries. These recaps are intended for entertainment purposes. None of the information in this piece is financial advice. Always do your own research and talk to a financial professional when making investment decisions.

Disclaimer: Every project we have talked about we own an NFT or multiple of those NFTs. Always do your own research before making a purchase.