There was a big flower field in the City_aab1. Flowers were blooming, birds were chirping, and bees and butterflies were having a picnic in the field. A hoverfly was in there. She was born in nowhere and grew up in nowhere. She enjoyed pollen every day even though nobody knew her. Sometimes the butterflies saw her, but they just passed by thinking "She's a bee." The hoverfly named herself 'Yanghwa."

Only bees recognized that she was a hoverfly. Every morning, under the bright sunlight, they greeted each other in the flower field. "Hey, Yanghwa! How are you today?" "Hello, bee fellas! I'm so good! Have a good harvesting day!"

Just like other days, Yanghwa was eating pollen sitting on her favorite dandelion. But the scent of it was unordinary good on the day. "Hmm, what is this smell? I don't think this is a scent of dandelion!" Yanghwa thought that it is weird, but she just came back to her home.

And everything happened the next day. Every bee, butterflies, and ants of the flower field screamed. "I lost my kid!" "Where's my home?" "All my friends disappeared all of a sudden!" The flower field became noisy so soon. Yanghwa felt somewhat weird on her body, too. "This is weird. This dandelion smells different."

Yanghwa couldn't meet her bee friends anymore. Things didn't get better even after one day, two days, and one week. "I can't live here anymore. I will leave." "Me neither. I lost my family." Many insects left the flower field.

Yanghwa didn't want to leave the flower field. She lived alone, and she could stand the flower scent even though it was different. But she started to feel lonely as she watch others leaving.

That night was the most sorrowful one. Dropping tears, Yanghwa tried to go to bed. The flower field was so silent. But then, someone wildly knocked the front door!

"Yanghwa! Yanghwa!" Yanghwa ran to the front door and opened it. Bees were there, almost fainted. "Guys! I thought you left. What happened?" "We saw the truth. Nobody left the home. Nobody disappeared." "What do you mean?" Bee seemed frustrated. "Everybody forgot each other. It's because of The Forgotten Mist."

The bees and Yanghwa had a talk sitting at a table. Yanghwa said. "Okay, Please tell me what exactly happened." "The Forgotten Mist is the mist with an unordinary scent. If you touch the mist, you will smell differently, and other insects won't be able to recognize you." "I smelled the unordinary scent, too. So that means I touched the mist, too."

"We were going far from the flower field before the mist spread to the flower field. When we got back here, everything seemed weird. That's why we tied ourselves with strings." The bees showed the string tied to their waist. "So we could recognize each other even after we touch the mist."

"I got it. So we can just wait until the mist disappears?" "The mist will never be gone." "What do you mean?" "This mist comes from the tower that humans built in the middle of the flower field. I guess it is supposed to water the flowers, but recently it is spreading somewhat differently. That becomes The Forgotten Mist." There was a moment of quiet.

"Guys, is there any way?" "There's only one way. Destroying the tower. But we have to go inside the tower to do it. It's too dangerous." "I'll go inside."

"Are you serious, Yanghwa?" "I don't care even if it's dangerous. I used to think that my life is enough with you. But it was not after the flower field became this bad. Every insect nearby was my precious neighbor." Yanghwa barely stopped crying. "I want to get this field back to normal. If there's a chance." Bees answered. "Let's go together, Yanghwa. What's the friend for?"

So the bees and Yanghwa headed towards the tower in the middle of the flower field.

Soon they arrived at the tower. The tower was so high, and the mist was coming out from the end of it. "How do we get inside?"

"I'll go inside. You guys stay here." "What? Yanghwa, are you serious? Let's go together!" "The tower is too narrow for all of us." It was true, and the hole was too small. "It was me who said to come here. I'll go inside." "Okay, but make sure you come out when it gets too dangerous." Yanghwa went inside the tower through the hole. Several cables were tied to each other in the center of the tower. Just a slight touch could give Yanghwa an electric shock. "Let's be really careful..."

Yanghwa went up very slowly. Inside of the tower was very hot and silent. It felt like there were only tower and Yanghwa in the world. "I must not give up. I must go up for the flower field and my friends." It was the hardest time in Yanghwa's life, but she couldn't think of anything at the moment.

Eventually, Yanghwa reached the top of the tower. So many cables were connected to the liquid tank, and the tank was spreading the liquid furiously. The liquid was becoming the mist outside of the tower. "What now?" Yanghwa thought. After thinking of a few ideas, Yanghwa started to cut the cables one by one. Then the amount of liquid spread became less! The more cables Yanghwa cut, the less the liquid spread. Eventually, there was only one cable left! "Everything will get back to normal if I cut this up!"

Then it happened. The tank full of liquid couldn't store more of it. So it got blown up! The liquid swept Yanghwa like a tsunami. "Help me! Help me!" Many cracks appeared on the tower and soon it poured the liquid like a waterfall. The bee friends outside shouted. "The tower has been destroyed! Yanghwa nailed it!" "Where's Yanghwa? Find Yanghwa!" Yanghwa fell to the ground. She slightly heard the voice that called her, but she couldn't say anything because she was dying. The bees couldn't find Yanghwa.

The mist was gone, and the flower field went back to normal. The butterflies that left the field, the bees that lost their families, and the ants that lost their homes all got back to the field. "My home! All my things are here as before. What a relief!" "Mother! I thought I lost you." "I don't know why. It was like we lost everyone when they are right in front of us." But nobody could find just one hoverfly.

The Forgotten Mist has stuck to Yanghwa's body forever. She was born in nowhere and grew up in nowhere, but now she became alone.

Only bees remembered the hoverfly. Whenever the full moon rises, the bees came out to the ruin of the tower and put a honey jar. Bees talked: "Do you have any idea where Yanghwa went?' "I don't know. But I'm sure that she's near us. This flower field owes her. This honey is the gift for her." The moonlight was shining on the flower field.

After that time, the bees went back to ordinary life. One day, they were busy with the queen bee's wedding anniversary party. While they were preparing for it, a hoverfly visited the hive. "Hello... I heard that today's the queen's wedding anniversary. Right?" "It is. How did you know?" "I just heard it. Please tell her congratulations. Goodbye." "Hey, can you wait for a second?" A bee quickly brought a jar of honey. "Please take this." "You don't need to do this." "It's fine. Thank you so much for visiting." The unknown hoverfly smiled brightly. "Thank you. I will bring the gift next time."

Yanghwa left the flower field. She wandered around the city_ aab1. When she was tired, she found a flower shop. That was my flower shop, yuaeyin.

Now Yanghwa is my family. She sometimes misses her bee friends, but now she's okay. She knows that her friends are fine, and that's enough for her. Yanghwa is not alone. 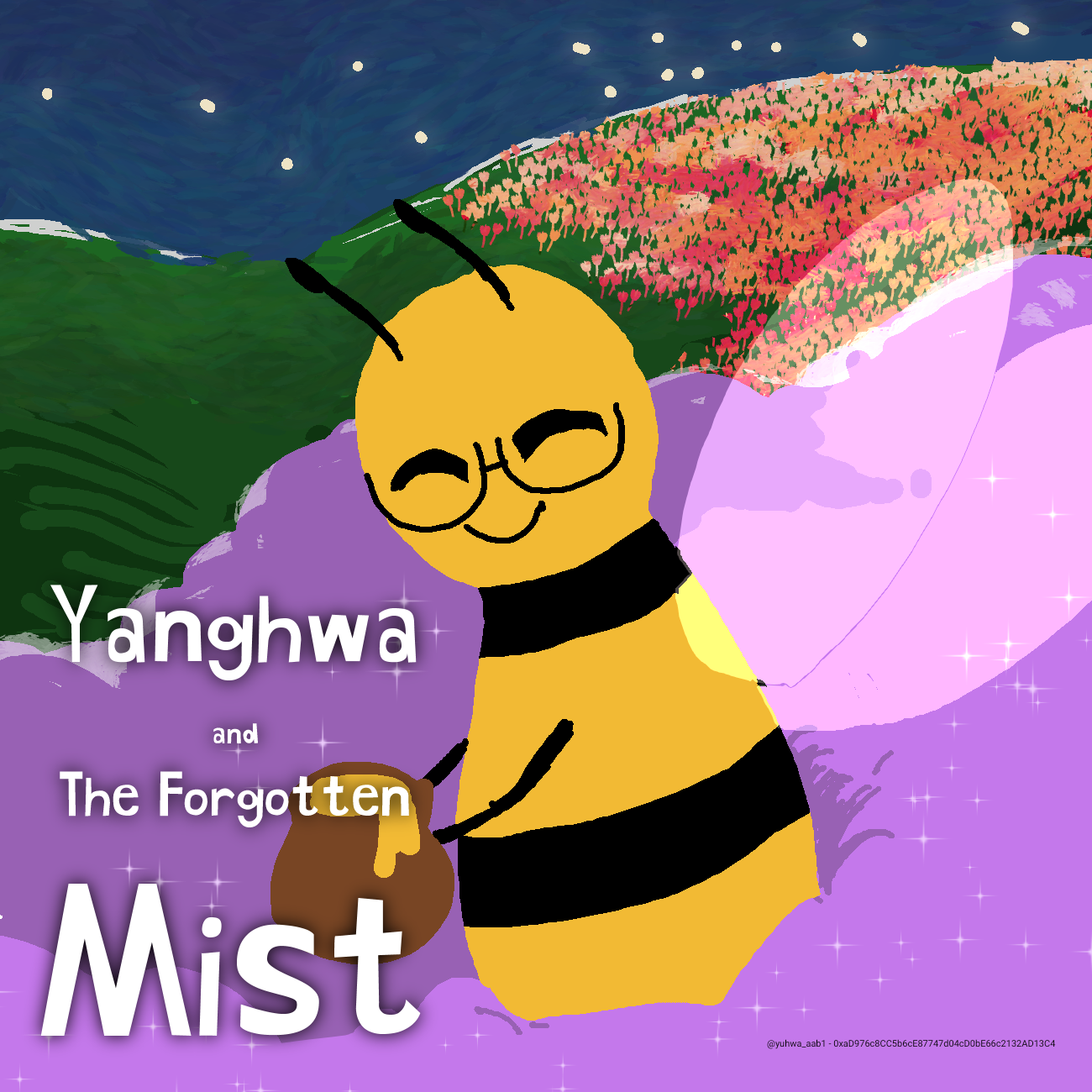 Thank you for reading! This time I wanted to describe how Yanghwa came to my flower shop, Yuhwa_aab1.

The Forgotten Mist is the water with the chemical liquid that distorts the insects' pheromone. Insects use pheromone for finding their home or recognizing allies.

I didn't describe it in the fiction, though.

I hope more people can read and love my fiction, but the most important thing is that I already have fans like you. So thanks to Paragraph, Unlock Protocol, Polygon, and especially YOU.

See you in the next fiction!