Friday night, after the Certainty Summit, a CCA graduate asked my opinion on whether they should pursue a doctorate.

It might surprise you to hear that I think it's a great idea.

I have considered, over the years, getting a Ph.D. It's something I've discussed with Dan Nicholson and Dr. Jeff Spencer a few times and it typically sits in the back of my head as a "later" thing. Every now and then it creeps back to the forefront of my mind because, while tedious and time-consuming, the process is a force multiplier.

I am pretty open about how I feel about academia, in general:

What works in the classroom does not always work in reality. Because things move.Things That Move (updated):https://paragraph.xyz/@nicpeterson/4-things-that-move

To be clear, I am not throwing stones at all academics or intellectuals; only those that remain ignorant of the fact that the classroom and reality are different, that theory and application are different.

And while they can coexist they must be prioritized.

A series of questions to ponder:

Who is more intelligent...

Who do you consider more rational or intelligent?

It depends on what they want.

Nearly every literate person in the United States would agree that scientists are more intelligent than the villagers in the example above.

This has been and always will be the issue I have with academics and intellectuals; they remain ignorant of the fact that theory and practice are different things and that practical application must come first to be considered rational or intelligent.

[Finally] A Practical Theory of Intelligence

If what is good for survival is rational, what is intelligence?

Near the end of the Certainty Summit, Dr. Todd Snyder gave his graduate presentation called:

"How To Upgrade Your Intelligence"

It started exactly how I would expect an academic to start a presentation; a lot of words, definitions, facts, and theories. Here is the third slide: 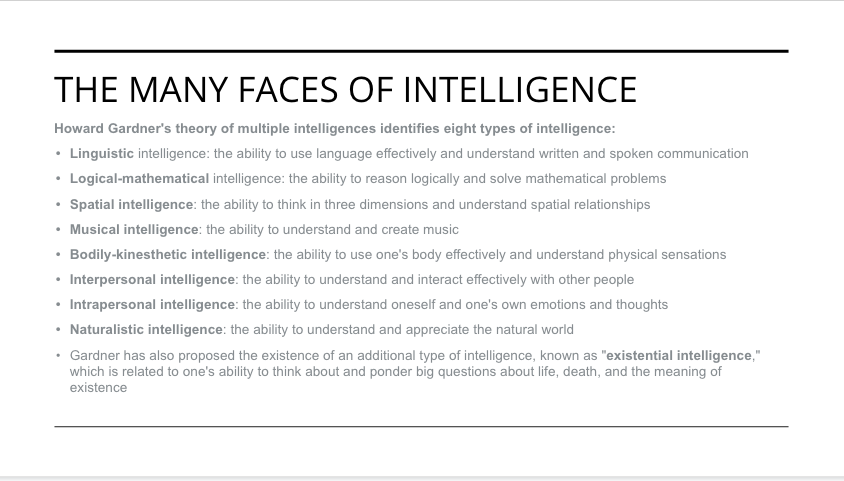 But Todd quickly diverges from the expected path and goes on to tell two stories:

Story 1: Working with a kid that was low intelligence by nearly all testing types, he noticed that even though the kid didn't know the answers to questions he was being asked, he could answer them correctly by listening closely to Todd's voice as he asked the questions. This kid was able to recognize that if he answered correctly he could get what he wanted, and figured out a way to do it.

Story 2: Working with a kid that was high intelligence by nearly all testing methods and types he noticed that the kid was extremely OCD. He wanted everything perfect, and he wanted to pass his tests so badly that he couldn't finish any of the tests he was taking. His extreme perfectionism caused him to keep circling back to each answer multiple times to make sure they were perfect until he ran out of time to take the test. This kid recognized that by testing well, he would get what he wanted, but was unable to do it.

Todd asked himself a better question, a version of:

"Who is more intelligent...The kid that has figured out how to get /craft the future he wants or the kid that can't?**

**This is a question that one would ask only after contact with reality. A true academic or pure intellectual wouldn't even consider something that might threaten their position of intellectual superiority.

And then proposed the single most practical unifying theory of intelligence I have ever heard:

"Intelligence is the ability to get what you want."

It's saying: "you can find a million and one ways to convince yourself and others that you are intellectually superior to someone else, but if you can't get what want, who cares?"

And it brings us back full circle to "it depends on what you want".

Remember the villagers from the example above? Let's assume they don't understand germ theory and what they want most is for their children to stop getting sick and dying. When the scientists arrive they start telling the villagers to stop being superstitious, they aren't being punished by the gods, and start explaining microbes and germ theory.

The villagers do not have the base knowledge to even begin to understand that there are invisible things in their water making them sick, or that their traditions and superstitions are invalid; it's all they've ever known. So they don't listen because it doesn't make sense to them.

You come along with a group of friends, realize all of this is going on, and tell the villagers "Yes, you must make this water hot until it bubbles or the gods will be very angry." And then you create compelling and captivating stories and put together groups for the families to hear these stories about why they should make their water hot until it bubbles. These efforts lead to more families more consistently and thoroughly boiling their water before drinking or making food with it. Consequently, the children in the village stop getting sick as often.

If what the villagers really want is for their kids to stop getting sick and dying - who made them more intelligent, the scientists who failed to give them the ability to get what they want, or the group that gave it to them?

The intellectuals in the classroom would tell us that the scientists were making the villagers more intelligent and maybe argue that your group made them less intelligent by reinforcing an incorrect view of the scientific world.

Just like the lower middle-class MBA believes Elon Musk is incorrect and doing everything wrong and just like every Ph.D. that proved, with their fancy financial models, that Google would never be profitable and free shipping would be the death of Amazon...

Reality disagrees with the merely intellectual.

In reality, intelligence is the ability to get what you want.

It depends on what you want.

Does a lack of higher education make you less intelligent?

It depends on what you want.

Do things that make you more intelligent, and increase the probability that you get what you want or have the future that you want.

Ps. I probably botched most of the stories, but you can see the full presentation above. The replay and his slides are available here along with other graduate presentations.

PPS. Why would I consider getting a doctorate or encouraging someone else to do so? In both cases, we want the same thing; training in a more robust and rigorous process plus access to resources that are typically only readily available to doctorate students. The process of getting a Ph.D. would make us both more intelligent because of what we want.