"Most prefer the certainty of misery to the misery of uncertainy"

In every program in every business and before every speaking gig I do I stress the importance of "open loops"; letting yourself be uncertain about something before trying to make sense of it. Your brain will fight like hell to close that loop because it doesn't want to sit with uncertainty and/or it can feel smart by making sense of things.

Here is the short version in case you're a little ADD right now. Read this if you just want the loop closed so you can think 'aha got it'.. and then immediately unsubscribe.

Open loops are important. Your brain will try and make sense of things (close a loop) as quickly as possible. This is a huge problem. Here's why: 👇

Cognitively lazy thinkers will not do well in these parts.

This is most dangerous when combine with Outcome Bias: judging a person or decision based on the outcome instead of the logic, reasoning, and evidence behind the decision.

That's right, it's downright stupidity to judge a decision on the outcome and outcome alone.

If you don't believe me, that's fine. I have a friend that won ten million bucks playing Russian Roulette yesterday. I decided I would go to bed early and refine my writing skills today. If you believe an outcome is the only way to judge a decision, you shouldn't be reading this or listening to anything I say, you should be playing Russian roulette.

Anyone that plays poker knows that you can play a hand perfectly and lose to an idiot. Why? Because randomness exists in poker, it exists in spades throughout the rest of your life.

Here is the reality:

Our brain, being lazy and wanting to make sense of things, judges the outcome, not the logic, reasoning, and evidence behind the decision or accounting for randomness. 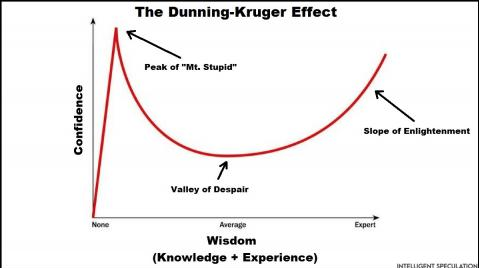 By quickly making sense of things (closing the loop) you are being cognitively lazy and robbing yourself of an opportunity to actually learn. Instead, a convenient story is created to put your brain at ease, and your expectations become a byproduct of an incomplete, fabricated experience.

Using this story, they label themselves and others and start prophesizing about the future.

^ These people are the worst. They are so certain of themselves all the time but also so angry because reality never unfolds as they expect (no shit, their expectation was ridiculous, to begin with). When reality doesn't meet their expectation they become toxic and polarizing. (It's easy to spot them because they sit around and wait for a single outcome to validate their world view)

Don’t be this person.

Judge the logic, reason, and evidence of a decision.
Assign respect and authority to the quality of logic, reasoning, and evidence a person uses when making decisions.
You will be surprised how much respect you reallocate to yourself once you know where to look.

Kept this one short because I want to see my dogs and did a deep dive video for The Guardian Academy on this earlier today. It's got pretty pictures and stuff:

More on this later.

PS. If you are having a hard time with open loops, start here.
...And if you are wondering where the comment section is, it's disabled but if you want to drop a 6WU or share a perspective, do that right here.