Observe them at your own risk.

Recently, my Twitter feed has been flooded with people that believe newsletters are the next big thing. Various versions of "The Newsletter Economy is coming!"

Newsflash; the newsletter economy has been here for a while. Big brands, small businesses, and personal brands have been crushing newsletters for decades. This is indicative of how little attention people pay to anything and a reminder as to why one should never follow the masses, especially when the masses think they have stumbled upon the next big thing.

Okay, rant over. Will tackle that another day. Back to newsletters:

It depends on how you choose to define "work".

If you have a business that already has customers, a newsletter will almost certainly increase the retention and LTV of each customer. If you're trying to figure out how the pay the bills tomorrow, a newsletter is definitely not the best option.

Here's The Story Behind My Direct Mail Newsletter

In 2019 I started sending daily (sometimes multiple a day) emails called "Though Bombs" and a $ 97-a-month direct mail newsletter called "The Letter". As you can see I spent a lot of time on the names of each.

So did it work?

I'm a helluva lot better writer now than I was in 2019 and many of the thoughts crystallized through the process have turned into multi-million dollar products, services, and certifications. So yes, it served its purpose for me. It just so happens that the purpose had nothing to do with making more money or growing an audience.

But something weird happened...

Despite the lazy naming conventions and the fact that it never had digital copies available, the Letter kept growing. I would see screenshots, and Instagram stories and get text messages of the Letter in backpacks, binders, and on desks. 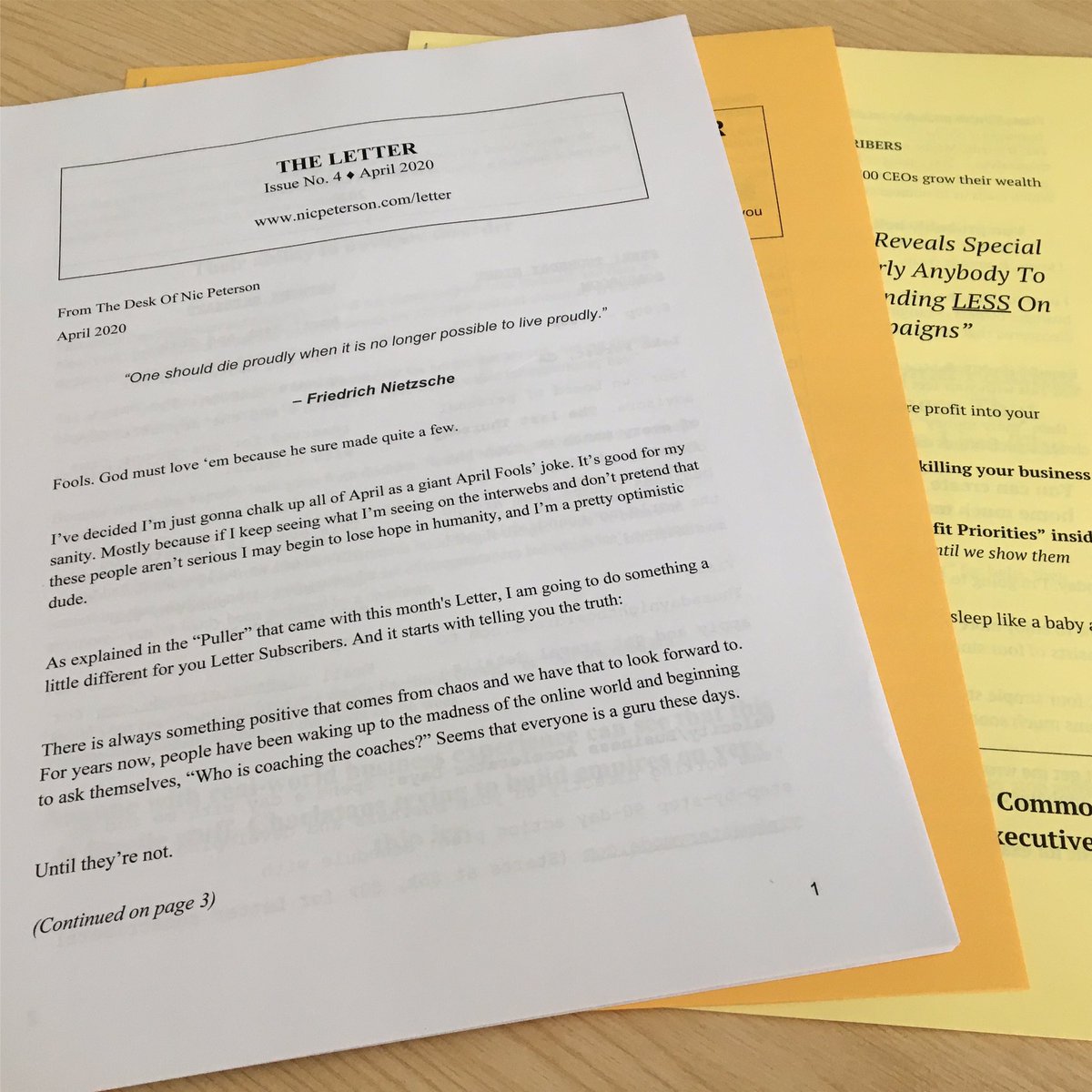 It was clear to me that even though people claimed to want digital copies, having an analog copy; something they could physically hold in their hand hit them differently.

They were paying attention. There were no notifications to distract them. And they must have been telling others...

... because subscriptions kept rolling in

And then I discontinued it.

It did work well for me. Even though I am still mediocre, at best, as a writer I am significantly better than I was when I started sending daily emails and a monthly newsletter. The function of the Letter was to improve my own skills in a specific area.

The fact that it had hundreds of subscribers, brought in tens of thousands of dollars a month and people liked it was a bonus, but not the primary function. Once the returns on skill development became diminished, it was time for me to move on, even if the revenue was consistently growing.

The truth is, even though I do not make any revenue from selling Letter subscriptions, I have made significantly more since discontinuing because the skill that I developed in going through the process has been applied and compounder over and over and over again. (This is why I think in force multipliers and leverage, not selling stuff for money)

If you want to check it out, there are a couple of free issues in the Nic Peterson Archive here and ...

The full archive of digital copies is available here. Even the digital copies are still getting posted about. It's $475 but the truth is I don't want you to buy it, it's there so it can be free for Wolf Pup holders, just connect your wallet and on checkout, it will drop your total to $0.

There’s so much to this gem💎 thank you @WolfDenLabs @PeterNicson for putting me on the quest to unlock ‘Grey wolf status’In the way that:✏️I approach learnings/the lens in which I’ve started viewing the world✏️I’ve started questioning frames, biases and paradigms New Function, New Form. What Is This Newsletter All About?

So here we are. Brand new blog/newsletter format, and a brand new function/purpose. If you want to zoom way out, you can see the big picture in this tweet thread:

I went above and beyond again and named this: Nic Peterson Stuff and Things but "Force Multipliers" would have been more appropriate. This newsletter functions as both a blog and a newsletter:

Newsletter: With some frequency, weekly perhaps, I will send out a newsletter. It's basically a blog post that also gets emailed to you. The newsletter will be formatted like a standard newsletter and will be exploring the things in life that give you the greatest advantage. As my partner and good friend, Dan Nicholson would say: "Rigging The Game"

I like to do stuff for free. Because it's free and because I don't really care about getting attention or followers for the vanity metrics, I also like to keep headaches as low as possible. I will probably never read any emails you send me and the comment have been disabled from the blog. I will tell you, repeatedly, to play your game. What kind of hypocrite am I if I don't play mine?

It's possible that in the future I do a paid version sent less frequently, but it would have to function as a force multiplier of sorts so I can't tell you what that might look like.

All I can tell you is that when I see it, I will share it, and hopefully, this "over-the-shoulder" type of thing is helpful to you.

Ps. If you have feedback, comments, or anything like that, just drop them here.