From the February 2021 Letter

Another week, another newsletter, another inversion of conventional wisdom, and throwing a few more stones. 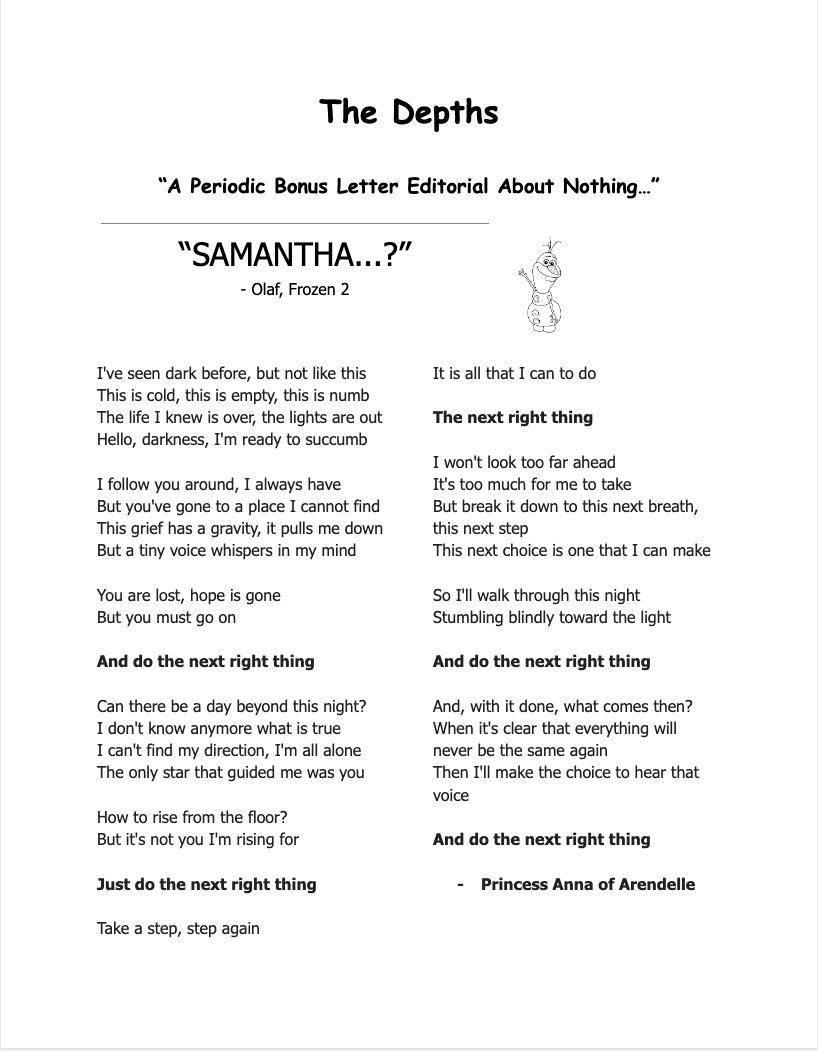 In the classroom, or anywhere else people aren't burdened with contact with reality, progressing forward (or upward) is all about finding the right answer. In reality, progress is made by asking better questions and then doing the next right thing.

The photo above is the first page of a bonus puller called "The Depths" that came with the February 2021 issue of my since-discontinued $ 97-a-month direct mail newsletter.

You can read the full thing here. **

Not only will you get a peak inside how we were able to create massive differentiation in a crowded market, but you will also learn a lot about yourself, why you might have a hard time doing the things you plan on doing, and a little bit of french.

**The rest of this newsletter is written as if you have read the excerpt above.

Our brains will try and bias "more" as the answer, an extreme bias toward positive action which causes to miss nuanced things like:It's not that exercise is good for us. It's that sitting as bad for us. When you are exercising you are not sitting. 👇

Discipline, believe it or not, is lazy. It's refusing to look at the root of the problem(s).

Discipline says:
Exercise is good for you, therefore you must do it or you are undisciplined.

Honesty asks:
"Sitting is bad for me. Why do I sit?"

Honesty asks:
"Why do I reach for drinks? Am I even thirsty?"

Discipline says:
You need to practice restraint and control your emotions.

Honesty asks:
"Why I am being impulsive?"

Most of the gurus out there shoving discipline down your throat are trying to get you to avoid the real reason you're struggling and are too lazy to do the work to figure out how to actually help people - including themselves. The adaptive dilemma strikes again.

Discipline is an answer, so our brains accept it. Not only is it an answer, but it's a positive action, which our monkey minds also love. Honesty starts with a question, a question that does not tell us what thing out there we need more of (discipline, restraint, exercise, etc) but asks what thing in here do we need to remove.

And when honest with yourself, discipline is a byproduct, and it's effortless. When discipline comes effortlessly, you start to progress at a rate that can be alarming, even to you.

But it's not your own surprise that I would be the most worried about.

There is a popular anecdote out there that says something along the lines of:

If you watch a bucket of crabs, anytime one of the crabs gets close to escaping the bucket, the other crabs work together to pull the rogue back in.

Fortunately, I have two boys, Jasper and Tundra; half Siberian husky, and half arctic wolf. Tundra has taken up writing and shares the real hidden dangers holding you back in Beware Your Own Pack

Tundra was first introduced to this concept when he attended a Certainty Summit.

There are many forces working against those of us that are serious about doing something extraordinary. Most of them are invisible. From the need to be right, to have the right answers, and believing discipline is the answer (The Depths) to letting those closest to us try to throttle us down to prevent too much distance (Beware Your Own Pack) from being created.

The problem is not that there are forces working against us, it's that we are looking in all the wrong places, directing our time, attention, energy, and resources to make incremental progress or, worse, none at all. We have to turn our attention to and direct our resources towards...

Okay, so there are forces working against you and, if you try and crawl out of the bucket, they'll easily pull you right back in. If you want to do something extraordinary you have to stack the deck in your favor with force multipliers.

It's very unlikely that you will be able to claw your way out; even if you did, you'd be wiped out from swimming upstream for so long. - but you can build a slingshot.

The recipe for building a slingshot is stacking force multipliers in a synergistic way that they combine to create so much momentum that the invisible forces at work cannot slow you down or pull you back on your way to the "next level". As the name suggests, they are multiplicative forces, not additive; meaning "doing more" (additive) is not the answer unless what you add is amplified by an existing force multiplier.

I'm not going to go too deep on this, because I am doing a deep dive for CCA students on Friday at the Certainty Summit in Seattle, but I will share the outline with you to get your wheels spinning:

Base knowledge: What you need to know before this presentation

Force Multiplier 5: The Authority Loop (this is a huge one for anyone that owns a business)

Most of the time, we limit the Summit to CCA students and graduates, sometimes we sell sit-in seats for $2,000, and for others we allow people to join virtually. It depends on the content and where the leverage is.

You might be able to join this upcoming Certainty Summit. Every now and then we allow people to join virtually if they show they are action-takers by jumping through some hoops. It's different every time because, well, leverage and stuff. I'll also explain how we decide how we set up it at the Summit on Friday which you can get access to here.