From The Desk Of Wolf Pup#0

If you're going to become a Grand Master Collector, you're going to want to understand the history of your Pups. From the color of their fur to their elemental constitution. While most of the NFT world thinks traits are just random combinations and let open sea or some other third-party app tell you how rare or valuable your Wolf Pup is, a true Master Collector knows better.

Each Wolf Pup is one of one, each has its own story and unique disposition. By understanding your Wolf Pups' traits you can highlight the things that make them distinct and, more importantly, understand how your pups might interact with the world around them.

The Pursuit of Gray Wolf Mountain: A Thanksgiving Tale

The Pursuit of Gray Wolf Mountain - A Thanksgiving Tale For the Den:Once upon a time, long ago, there was a pack of Gray Wolves. They lived in peace and harmony on their very own mountain. One day a couple of strange creatures wandered in looking for food and water

Once upon a time, long ago, there was a pack of Gray Wolves. They lived in peace and harmony on their very own mountain deep in Yavapai County.

One day a couple of strange creatures wandered in looking for food and water. These foreign animals looked tired, hungry, and desperate.

The Wolfpack had never seen these creatures before, but they seemed to be nice enough. The pack of wolves, however, could not agree on whether or not they should provide food, water, and offer protection. What to do in a situation like this?

Wolf Pup #0, Tundra said; “We should allow them to stay but they must have rules. We must be kind, but also have boundaries. We must be thoughtful and ration portions carefully. Plus, we must communicate with them and make sure that we are prepared to change course if need be. For we are strong, and because we are strong we can choose to be kind.”

His brother Jasper said: “No. We don’t know them. We must ban them - or better - kill them. They are not us, anything that is not us must be destroyed. Everything they eat is food that could have been ours and they could be setting a trap. We must destroy them now”

Their sister Molly, who always had a hard time saying no to others, butted in: "No. No violence. We must be nice and give them whatever they want because they are hungry and tired. What is ours, is theirs."

Jasper and Molly went back and forth: be strong and kill them all or be nice, roll over and give them everything they want. As they argued other members of the pack began to choose sides; those that feared conflict and dreamed of utopia sided with Molly. Those that sought conflict sided with Jasper. One by one by picked sides until a few of the elders stood in the middle with Tundra.

This conflict led to polarization in the pack; Jasper stormed off the mountain and set up camp at the neighboring mountain where his constituents went to live as warriors and raise aggressive, impulsive, and violent Black Wolf Pups. This mountain is now known as Black Wolf Mountain.

Molly and her constituents fled to a mountain on the other side of Gray Wolf mountain where they raised very nice, understanding, and easily manipulated White Wolf Pups. This became known as White Wolf Mountain.

Both sides believed that since they separated, they would be much happier.

In times of peace, White Wolf Mountain thrived. Everyone was nice, everyone had food, and felt safe. But in times of uncertainty, violence, or turmoil, the White Wolf clan would nearly get wiped out - unable to defend themselves or their Wolf Pup babies.

And while strong enough to protect themselves, the residents of Black Wolf mountain were often isolated, and alone. In times of peace, they could not thrive and they would need to create conflict just to justify their existence as a pack.

Over time, some of the Black Wolves and the White Wolves realized that those that stayed balanced on Gray Wolf Mountain were always in a state of peace and harmony. They had the strength to defend themselves when necessary and the kindness to choose not to. The Gray wolves were able to stand with one foot in the white and one foot in the black, giving them the balance to thrive in both peacetime and wartime.

While most of the wolves on either mountain were more concerned with being "right” and throwing stones at the other side, a few started realizing that they need both the strength of the Black Wolf Pups and the kindness of the White Wolf Pups to live peacefully and have a positive, meaningful impact on this world.

Whatever polarizing forces are at play, peace of mind, true strength, and the path forward is found in the Gray.

The Holidays in the Den are like most Holidays in most families or groups; strange. Every tight-knit group has its own wonky dynamics. The Wolf Pups are no different; they’re mischievous little dudes, wonky as can be. But like all family, group, and social dynamics, it’s not as random or impossible to control as it seems. There is a formula for peace, balance, and harmony.

In fact, the cheat sheet(s) are built right into the wolf pups’ traits.

So, in the interest of the most enjoyable Holiday season possible, we’re sitting down with Jasper and Tundra to work out some family issues.

Tundra is the Gray Wolf of the family. 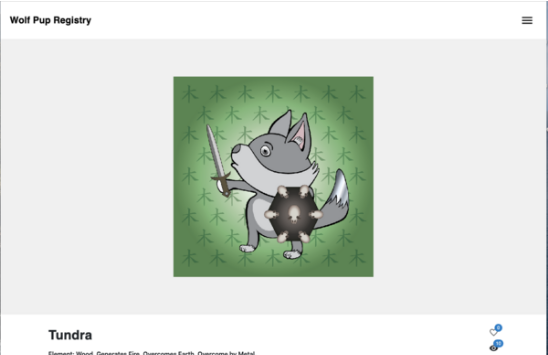 This means that most of the time he is the most balanced, reasonable, and thoughtful of the pups. When balanced, he is both strong and kind. But one cannot be centered/balanced at all times. It’s not reasonable or healthy to expect a Wolf Pup to be perfect all the time. The key is not to expect perfection, but instead to understand the makeup of the Pup to get back on center when thrown off. Their traits are like a cheat sheet to help get them under control balanced and/or energized when they get off track.

Take a look at Tundra’s inherent elemental constitutional (background in the photo above):

Wood generates Fire. Pups with Fire elements should keep pups like Tundra around as friends or partners. If they are feeling down or discouraged, a Wood pup like Tundra will be able to bring them back to full force.

Wood overcomes Earth. Earth pups that are out of line will get put in their place quickly by Tundra. If the obstacles, opponents, or hardships ahead are a byproduct of Earth pups, pups like Tundra can step in as a hero and overcome them. 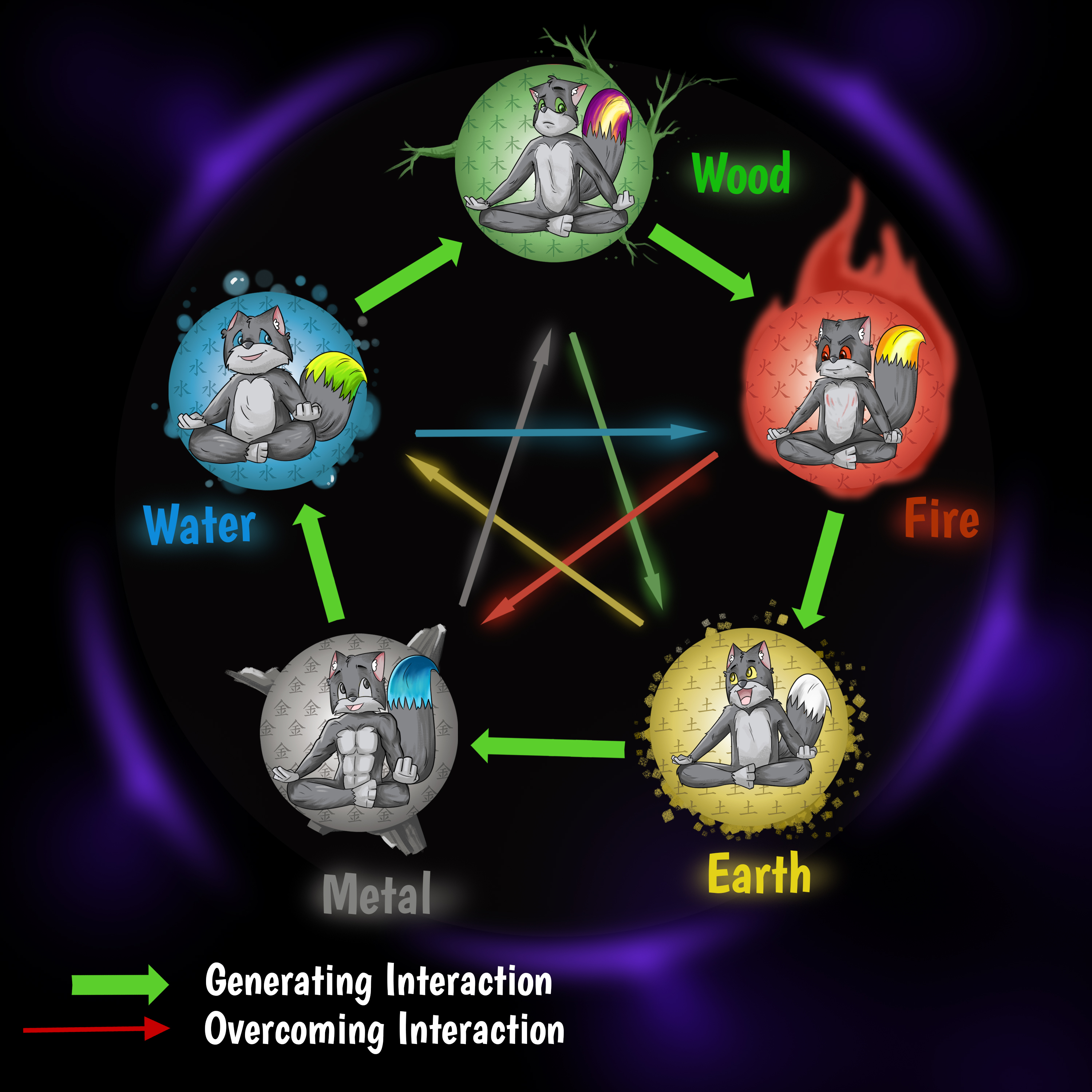 (Because Tundra is a Gray Wolf he is more likely to use his advantages to bring the situation back to balance than to create more chaos.)

You would think Tundra is totally in charge of the family most of the time.

But here is the problem:

Tundra, being an Earth element pup, is overcome by Metal.

And as it would just so happen, his troublemaker brother Jasper has a Metal constitution: 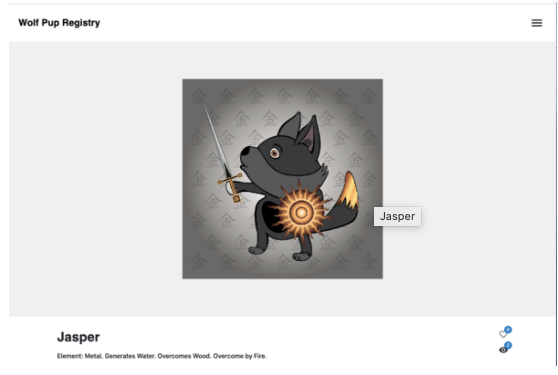 Jasper is a black wolf so he is often unbalanced, and when unbalanced he leans heavily into the aggressive, impulsive, and violent.

If you look at his bio above, you’ll see that as a metal Pup he generates Water. Water pups will be energized by his presence.

More importantly, in this case of Holiday family matters, Metal overcomes Wood. Even though Tundra is far more balanced, under control, and thoughtful, he can be cut down by his own brother fairly easily (metal cuts wood).

For years and years, Tundra has struggled to figure out how to balance Jasper out. This year, he finally realized, he has the cheat sheet right in front of him:

Metal is overcome by Fire.

How do we bring Jasper back to “center”/balance? How do we get him to stop setting fire to the decorations and shitting in the presents?

It’s not being more reasonable, more balanced, and leading by a better example (Tundra has already tried all of that). It’s by introducing a Fire pup to the mix (Fire controls Metal).

Of course, a black Fire pup might lead to all-out war given their propensity to use strength as the means to resolve everything. But the white Fire pup might be a little too passive. Ideally, we would be able to find a Gray Fire pup to add to the family.

Tundra understands that we do not live in a world of ideals, so he will begin his search and see what he is able to come up with. 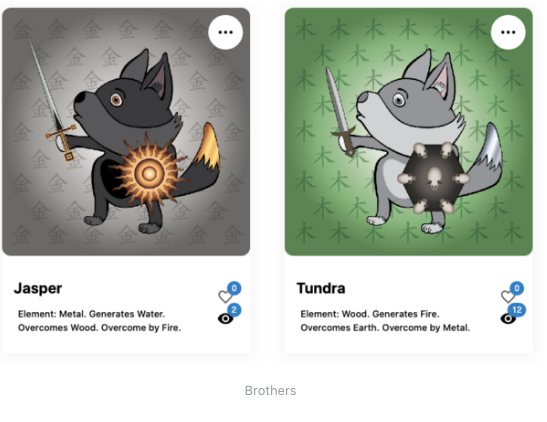 There is no perfection.

There is no Utopia.

Just a never-ending pursuit of balance. A master collector has a pack that can balance itself; it may be chaos and require a lot of effort, but the pieces are there. A Grand Master Collector has a balanced pack worthy of Gray Wolf Mountain.

At least now, Tundra has the cheat sheet and each Holiday season should be better than the last. (Soon he will learn that when he introduced a Fire pup to the mix, he will need to control that fire as well).

While a white wolf often wishes for Utopia; “can’t everyone just get along!?” and a black wolf often wants to destroy everyone and everything it doesn’t agree with, The Gray Wolf understands that the real mission is for ongoing improvement, over time.

Your mission to Grand Master Collector is the process is improving, consistently, over time.

Will this year be better?

By studying the origin/history of your Wolf Pup you will also be putting together a compass or a roadmap to Gray Wolf Mountain. There are clues everywhere in both the past and the present.

Most are hidden in plain sight. Keep your #wolfish eyes peeled for them.